The Sky Diamond is a magic item in Skylanders: Swap Force included in the Tower of Time Adventure Pack. It causes enemies defeated in battle to spout a shower of diamonds that are worth 20 gold each.

In Skylanders: Trap Team, the Sky Diamond ability has changed. Instead of receiving diamonds from defeating enemies (that role has been given to the Piggy Bank), it gives the player the ability to get diamonds from breakable objects (crates, vases, etc.). The timer for the Sky Diamond has also been shortened.

In Skylanders: SuperChargers, placing the Sky Diamond on the Portal for the first time will unlock a Legendary Treasure of the same name that can be placed in the hub world. When placed, it can be broken open daily to generate hundreds of gold pieces. 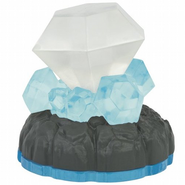 The Sky Diamond's toy figure
Add a photo to this gallery

Retrieved from "https://skylanders.fandom.com/wiki/Sky_Diamond?oldid=102692"
Community content is available under CC-BY-SA unless otherwise noted.