Short Cut is a seamstress and one of the Undead Trap Masters in Skylanders: Trap Team.

Short Cut is a short, orange faced creature with yellow eyes, a stitch on his forehead, and only two upper teeth.  He wears a brown, pointy cap that covers the top of his head and his back with stitching on the front and the Trap Master logo stitched on the back.  His shirt is dark brown with a belt over it, he wears light brown shoes, and as well as silver arm guards over his orange gloves.

Short Cut can be a perfectionist, but only because he loves what he does. He puts a lot of time and energy into creating each masterpiece.[1]

Short Cut was renowned for making the finest clothing in all of Skylands. With his magic shears, no thread was too thick, no cloth was too bunchy, and no pattern was too hard to follow. But one day, a fleet of flying sailing ships appeared overhead, crewed by raucous Skeleton Pirates. Having plundered a cargo of golden yarn from fortunetelling soothsayers, their leader demanded that Short Cut stitch together a magic hat that would tell him the futures of everyone in Skylands – or suffer the consequences! Not wanting to see his work used for evil, he bravely snuck onto the ship that night and sewed the pants and shirts of the sleeping pirates together so they were unable to fight. Short Cut then used his magic shears to cut the sails and wrap them around the ship, preventing the pirates from escaping. His brave actions caught the attention of Master Eon, who quickly made Short Cut a member of the Trap Team, where he now uses powerful Traptanium Shears to cut evil’s future short with every snip!

Short Cut was among the Skylanders that took part in the fight against Pain-Yatta's army of candy warriors. Lead by Gearshift, he and several other Skylanders fought a group of candy soldiers to save three Mabu before retreating into an old castle fortress to hold out when the army began to grow in numbers.

As they were cornered by the candy army within the fortress, Short Cut and the other Skylanders served as Skylands' last line of defense, battling Pain-Yatta's army with all of their might. The candy army soon fell to pieces just as the Skylanders were becoming overwhelmed (thanks to the actions of the Light and Dark Skylanders in their fight against Pain-Yatta), earning the heroes their victory. 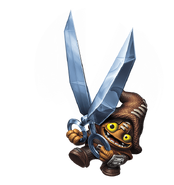 Retrieved from "https://skylanders.fandom.com/wiki/Short_Cut?oldid=114966"
Community content is available under CC-BY-SA unless otherwise noted.