Sheep Creep is a sheep who is one of the Life villains in Skylanders: Trap Team. According to Buzz, he was originally sent to Cloudcracker Prison for leading a unlucky sheep rebellion. He was found in Soda Springs, and is notably the first villain to be fought and captured, despite his rapid fire cork guns.

In Skylanders: Battlecast, Sheep Creep is used by Buzz as a sparring opponent in the Skylanders Academy section in the Second Dimension. He is one of the only enemies without character spells other than his Special Ability, but compensates with a lot of health.

Unlike other sheep, Sheep Creep isn't one who looks at clouds all day. He is even willing to lead other woolly warriors on several rebellions (many of them ending in failures).

Sheep Creep may be an ordinary sheep, but he packs a corkshooter, which he uses to fire a stream of corks. He can also unleash a woolly explosion.

Sheep Creep about to engage the Skylander in a battle 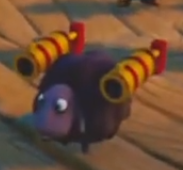