The Sheep are common local animals in the Skylanders series, and the most notable.

Hugo strongly dislikes sheep, calling them 'evil' and fearing them. Hugo attempts to convince people to believe that Sheep are evil, but others don't believe it due to how harmless the sheep are. According to a note from Hugo, the sheep are among 'the most feared creatures in Skylands' and that many Mabu 'find their belongings missing after falling asleep while counting sheep'. Another scroll mentions that Mabu use small tornadoes to get rid of sheep. However, it is most likely a propaganda by Hugo himself, as he greatly despises sheep.

Sheep were unwilling victims of some invisible Trolls who caused mischief in the Mabu Market, making the Skylanders believe that the sheep were flying by themselves when they were really being carried by the trolls.

Mega-sized sheep terrorized the trees of Giggling Forest, and Drill Sergeant was sent to the forest to deal with two mega-sized animals. Before he can land a hit on the sheep, Kaos, who had claimed to be turning over a new leaf by battling evildoers, arrived and saved the forest by making the sheep 'vanish'.

Hugo was later turned into a sheep by being forced to wear the Shapeshifting Sapphire amulet by one of Kaos's minions until he was returned to normal.

Despite harmlessly grazing the Ruins, the sheep play a small role as an obstacle. When Arbo needs to gather apples for special seeds, the sheep will try and eat the apples. The Skylander will then have to gather the apples before the sheep eats them, in order for Arbo to be able to find the location of the Eternal Life Source. Also in the console version, when your Skylander is holding the oil can you can oil the sheep to turn them black, but after a while the go back to white.

In the 3DS version of Spyro's Adventure, sheep are the local animals in the Radiant Isles. In Daystar Temple, whenever you break the sacred Sheep statues, your Skylander will temporarily turn into a Sheep. After a while, they change back. You can also unlock a sheep statue for the sanctuary with the same effect.

Sheep sometimes will attack the Dread-Yacht in the turret minigame, implying they may be evil after all. They also appear in a few levels, as in Rumbletown.

Sheep also serve as the local fodder in the Cloudbreak Islands. In Iron Jaw Gulch, some sheep are seen wearing saddles, implying that the dirt sharks may be using them as steeds. However, the sheep are victims of attacks from Geargolems, and were used as ammo for Sheepshooters in Kaos' Fortress.

Sheep inhabit another part of Cloudbreak called the Sheep Wreck Island, where the Sheep Mage resides. He plotted to spread his fellow sheep's 'Sheepdom' across Skylands as revenge for the inhabitants mistreating sheep.

An villainous sheep named Sheep Creep appears as a trappable villain in Skylanders: Trap Team, having been arrested for leading an ill-fated sheep rebellion.

The Dream Sheep is an ill-tempered, evil sheep who is the master of nightmares from the Realm of Dreams. He is the main antagonist of the 3DS version of Trap Team and is on a quest to become ruler of Skylands.

Several sheep are seen in the opening cutscene where they are conjured into existence by the Ancients' Mind Magic during the creation of Skylands.

Sheep also appear as enemies in the Dragon Temple where normally, they live with the Dragons in peaceful harmony, but have turned evil for unknown reasons. With the help of dragon magic, they were eventually reverted back to normal.

A sheep also serves as a Life Imaginator ability, where the Imaginator transforms into a sheep. Enemies won't attack the player while in sheep form.

Concept art of the sheep and its transformation to its Berserker form from the effects of Pop Fizz's potion.

A zombie sheep as seen in the 3DS version of Skylanders: Swap Force 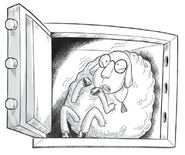 Retrieved from "https://skylanders.fandom.com/wiki/Sheep?oldid=125311"
Community content is available under CC-BY-SA unless otherwise noted.