The Shark Tank is the signature vehicle of Shark Shooter Terrafin. The Shark Tank is an unstoppable driving force when Terrafin is at the helm. Containing subterranean navigation, all-terrain teeth tread, and enchanted battle armor, it is primed and ready to take the bite to Kaos! 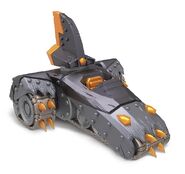 SuperCharged Shark Tank in-game
Add a photo to this gallery

Retrieved from "https://skylanders.fandom.com/wiki/Shark_Tank?oldid=113770"
Community content is available under CC-BY-SA unless otherwise noted.