Sensei Shrines are spherical relics protected by enchanted weapons in Skylanders: Imaginators that only Senseis can open to obtain their Sky-Chi and their Imaginator weapon equivalents, hence their name. These Shrines are also aligned with the Battle Classes and have different appearances matching the needed weapon, and thus each Sensei from every class can open the ones aligned with their class. Additionally, a cutscene is played whenever the Sensei is about to open one.

Every Shrine is decorated with Skylands Runes around the sphere and the weapons, and held up by a strange magical field coming from a device below it.

Brawler Shrine at The Cradle of Creation 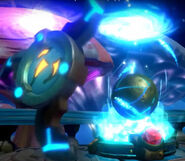 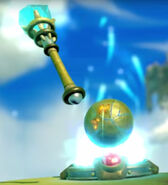