“The Luck of the Claw!”
—Scratch's official catchphrase

Scratch is a winged cat who is one of the Air Skylanders in Skylanders: Swap Force.

Scratch is a natural explorer, having investigated the crystal mines of her mountain home for days on end. She's still adventurous to this day.[3]

High in the peaks of Cats Eye Mountain sits a towering city of crystal and gold that can only be reached by creatures of the Air Element. It was here that Scratch spent her youth soaring playfully in the clouds or exploring the endless number of crystal mines. One day, an army of Pirate Greebles arrived in a fleet of airships, looking to steal ancient magic crystals buried deep in the mountain. Donning specially made armour, Scratch led an epic battle against the pirates, using her incredible fighting skills to defend the crystals and the city. Tales of her heroism soon made their way to Jet-Vac, who traveled to Cats Eye Mountain and recruited Scratch to the Skylanders.

Born in a city of crystal and gold atop Cats Eye Mountain, the young Scratch loved soaring through the sky and searching through the many gemstone mines. Her idyllic life was shattered when a band of Pirate Greebles invaded in their fleet of flying warships, plotting to steal the magical gems that lied deep inside the mountain. Donning her golden armor, some sharp claws and a nasty temper, Scratch led the counter-attack against the invaders for days on end. Although she was fast and powerful, the sheer number of the villains threatened to overwhelm her. Until that is, she realized their airships were built around enormous balloons. A few carefully aimed claw slashes later, and the pirates were sent plummeting back back down to earth. From that day to this, no Greeble has dared return to Cats Eye Mountain, and the city is safe once more. Scratch's heroic deed caught the eye of Jet-Vac, who invited her to join the Skylanders.

Scratch and Flashwing were assigned by Spyro to search for Master Eon at Molekin Mine when the old Portal Master was kidnapped by Squirmgrub, who was an agent of Kaos. However, without a Portal Master to operate the Portals, it took long for the two Skylanders to reach their destination.

Under Knight Light's command, Scratch participated with the other Skylanders in defending Skylanders Academy from Kaos and his aerial armada.

Scratch's golden suit of enchanted armor comes equipped with moveable lasers that come from the crystal atop of her mask. The crystal claws of her gauntlets are able to cut through virtually any substance, from solid rock to hardened steel, meaning there are few enemies who can stand up to a scratching from Scratch.[4] When further upgraded, Scratch can regain health by collecting treasure.

When imbued with the power of rubies, Scratch can fight more offensively. Her upgrades range from an increase in critical hit percentage, to better and more powerful attacks. Her laser ability now has much better area of affect and she gains a new attack that allows her to deal lots of damage in quick bursts to a single enemy.

When imbued with the power of sapphires, Scratch can fight more defensively. Now she can gain a boost to her speed as well as improved abilities that pertain to keeping her safe from enemies. Her laser attack can slow enemies that are struck by it, and she can unleash a whirlwind that sucks in enemies and immobilizes them briefly. 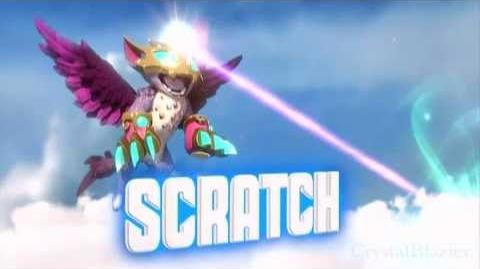