The Scorpion Striker is the name of a Battle Pack and its titular Magic Item, available with Hot Dog and Series 2 Zap. In Skylanders: Giants, it unlocks the Metal Hive and Cliff Dive Crag Battle Arenas.

When used as a Magic Item, the catapult launches explosive spiked balls at enemies. If they land on the ground or floor, they are set to detonate as soon as the enemies approach them.

The packaging of the Scorpion Striker Battle Pack 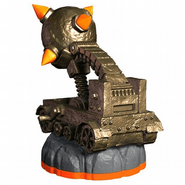 The Scorpion Striker figure
Add a photo to this gallery

Retrieved from "https://skylanders.fandom.com/wiki/Scorpion_Striker?oldid=106509"
Community content is available under CC-BY-SA unless otherwise noted.