“Take my card of destiny! Huh? Why isn't this working?”
—Ring of Heroes

Ryeo is one of the default Portal Masters in Skylanders: Ring of Heroes. She is the Prophet of the East.

As you stroll through the Academy, you will see a young lady in a beautiful dress behaving strangely. She’ll sometimes bury her face in a book full of words you can’t understand and mumble to herself or she’ll mix the card deck passionately. A mysterious woman who handles cards! Doesn’t it make you want to get your cards read? But you’ll be disappointed soon. Unlike how she looks, Ryeo is actually very bad at reading cards.

Every since she was an ordinary student back on Earth, she’s been interested in fortune-telling, especially cards. But some things can’t be easily accessed only with attention, like the burning fire, and the fate of the world and of mankind. Since she lacked the ability and her family was busy telling her to stop with the useless efforts, she was like a bonfire on the verge of being put out. As she went on with her ordinary life, she is destined to be the Portal Master of Skylands.

Although she became a Portal Master, that didn’t mean she acquired the ability to look into the fate of the opponent. It also didn’t mean that she acquired a wonderful ability such as that power. She just gained enough power to throw cards as she wishes. She was greatly disappointed but Master Eon and Hugo gifted magic cards that fit Ryeo’s powers and are suitable for battle. They may seem like normal cards but they’re an artifact that possesses great power. Although Ryeo is only able to throw the cards to block the eyes of villains for now, we can’t wait to see what Ryeo will be able to do with the mysterious cards.

With the power of her cards, Ryeo can temporarily grant an increase in attack power to her Skylander team. Her elemental specialty is Fire. 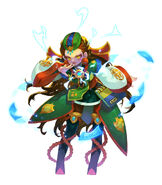 Concept art of Ryeo by LISO