“Sorry, landlubber! The map piece is in another castle.”
—Captain Rustbeard 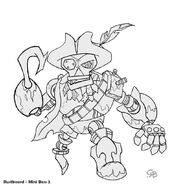