Rubble Rouser is an armored Rock Golem who is one of the SWAP Force Skylanders in Skylanders: Swap Force. He is of the Earth element. His Swap Force Ability is Dig.

Before being a rock golem, Rubble Rouser was originally designed as a mole with a mining helmet, his hammer as a shovel. In another concept Rubble Rouser could have been a mining termite, and instead of his Drill boots was going to have a drill-shaped abdomen.[1]

Rubble Rouser is always looking to improve the way things work - and for new rocks to pulverize with his hammer slam![2]

Hailing from a race of creatures who ate rock for a living, Rubble Rouser spent most days digging his way through the vastness of Deep Mountain mouthful by mouthful alongside the rest of his people. But Rubble Rouser found he could eat up far more ground with a swing of his hammer or spin of his drill. However, the leaders of his race wanted no part of changing the way they worked. That is, until the evil Rock Lords trapped them deep within the mountain. It was then that Rubble Rouser showed everyone the power of his ways by defeating the Rock Lords with his mighty hammer and drill. Afterward, the leaders encouraged Rubble Rouser to seek out the Skylanders, who readily welcomed him. 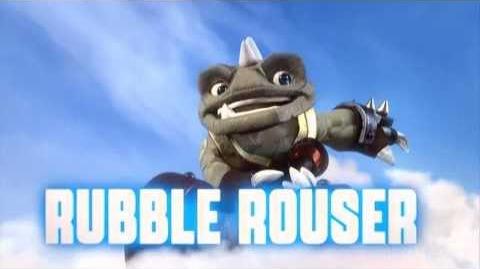