Roller Brawl is a vampire roller jammer who is one of the new Undead Skylanders in Skylanders: Swap Force.

Roller Brawl never gives up. Realizing that she was no match for the Drow on her own, she joined the Skylanders to fight lovesick Kaos.[1] Her SuperChargers Quest also shows her to be extremely dedicated to her training, even guessing Buzz's orders ahead of time.

Her personality file lists her as cunning and resourceful, making her an ideal scout and spy.

Roller Brawl grew up with five older vampire brothers, who were all very big and overprotective. Being the smallest of her family, she learned how to use her speed and cunning to become one of the toughest jammers in the Undead Roller Derby League. It was during the championship match when she caught the eye of Kaos, who fell head-over-heels in love with her. But when her overprotective brothers stepped in, Kaos had them captured by Drow and taken prisoner. Roller Brawl swore revenge, but even with her impressive skills, she was no match for an entire Drow army. Having developed a strong distaste for evil, she joined up with the Skylanders to fight against Kaos – while never giving up on her search for her brothers.

Roller Brawl can use the claws on her gloves to slash at enemies. She can also launch her skate blades as well as use them to travel at high speeds. After dashing, she headbutts enemies to deliver a high amount of damage. She can even closeline enemies while dashing and - when her Soul Gem is purchased - create a cursed energy link between herself and an enemy.

Should a Portal Master choose the Shadow Skater path, Roller Brawl gains enhanced Derby Dash abilities. With the Pirouette and Bullrush abilities, she can extend her dash attack in several ways, by either repeatedly spinning or by charging an enemy and then continuing her dash with absolute aggression. With the Hardened Helm, she gains more Armor.

Should a Portal Master choose the Skateblade Siren path, Roller Brawl gains enhanced Skateblade abilities. While the attack itself doesn't get any more powerful, she can use them in more ways, such as creating a protective field around her that slices through enemies or dropping them behind her during a Derby Dash to immobolize her enemies. With the Critical Claws, she gains a boost in her Critical Hit chance.

Regaredless of which upgrade path is chosen, Roller Brawl - rather appropriately - focuses exclusively on offense, though with different benefits and through different methods.

In Skylanders: Battlecast, Roller Brawl is a rare Skylander card with high damage output and many abilities relating to moving from sidelines to the front. Her Special Ability is Fearsome Charge, which allows her to deal extra damage to the opponent in the one turn, dealing more if she switched in that turn. Her signature Gear are the Blades of Gory, which damage the active enemy when she switches. 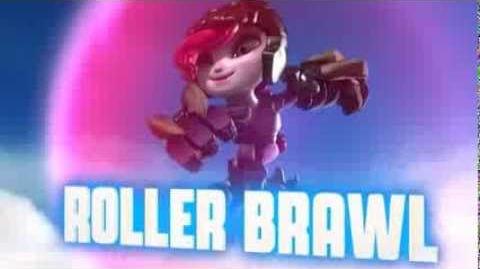