Rip Tide is an Aqua Fighter who is one of the core Water Skylanders in Skylanders: Swap Force.

Rip Tide was actually the very first SWAP Force character, but underwent numerous design changes during the development of Skylanders: Swap Force. His first incarnation was a fish-like creature named Krayken that possessed electrical abilities and had a sentient fish head as his left arm to trap enemies with bubbles, but during kid testing, it was discovered that the character looked unfitting on the franchise, and his bubble mechanic was too confusing as a non-damaging move.

The design was later scrapped and a frog-like warrior named Bubble Trouble was brought in, but the new changes to make him more battle-ready and clear made him more confusing instead, with too many contrasting areas and an unclear mechanic. As Wash Buckler and Freeze Blade had been approved at that point, Vicarious Visions decided instead to make him a Core Skylander, and pass on his abilities to other characters while making his fish hand a weapon on its own. The design and name evolved into Rip Tide, resulting with the traits from Bubble Trouble being passed down to Punk Shock and Wash Buckler.[2][3] From his final design to release, some features on him were also slightly changed, like having smaller eye sockets and a proeminent chin.

One of Rip Tide's other concept incarnations: Bubble Trouble

Highly adaptable, Rip Tide can master any fighting style in minutes.[1] In Skylanders: Battlecast, he has gallant and proud mannerisms.

Rip Tide was known far and wide as one of the best Aqua-Fighters in Skylands. He mastered a multitude of water techniques and astonished tournament spectators with his ability to adapt his fighting style to any opponent. Amongst his repertoire were Swordfish Fencing, Hammerhead Heaving, and even the rare Blubber Whale Wallop -- which he had used on numerous occasions in the legendary Rumble in the Reef. His unrivaled skill as a swordsman soon drew the attention of Master Eon. But when Kaos learned of this, he sent forth a legion of Squidface Brutes to stop Rip Tide before he could join the Skylanders... and everyone knows how that turned out, except for the Squidface Brutes, who after being knocked senseless can't remember a thing.

Being a skilled Aqua-Fighter, Rip Tide can swipe and slash his enemies with his Swordfish and Sharkfish like swords. He can also summon a large whale from his sleeve and slam it down on his enemies.

In Skylanders: Battlecast, he can use fish for a variety of effects, from food for his allies, to draining health with jellyfish, electrifying his swordfish for a debuff, and even summoning sharks and piranhas to add to his team's own damage. His Special Ability is Fish Feast, healing his allies, and his signature Gear is an Electric Eel, which mutes enemies who have Gear themselves. His scrapped card is Feeding Frenzy, which summons piranhas to attack and immobilize damaged enemies.

Increase the slice and dice power of the swordfish weapon!
Learn new ways to pound enemies with the hammerhead shark weapon! 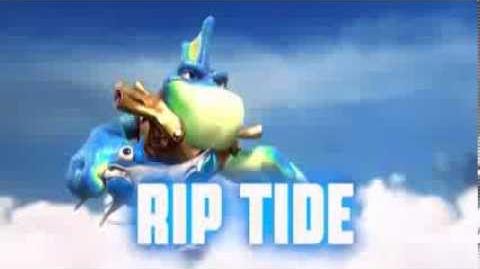