The official story leading into this year's all-new SKYLANDERS video game! The citizens of Skylands are in their most desperate hour as Kaos begins to tear the world apart with his newfound powers. Spyro and an elite group of Skylanders must enter an ancient and unknown part of Skylands and find the only hope left that can stand against Kaos' might! The origin story of the next big SKYLANDERS video game starts right here!

Raw image of the full cover of the Rift into Overdrive 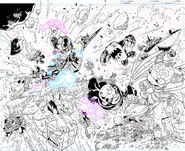 Lineart of the Rift into Overdrive Cover