Rattle Shake is a rattlesnake cowboy who is a SWAP Force Skylander in Skylanders: Swap Force. He is of the Undead element. His Swap Force Ability is Bounce. He has a Frito-Lays exclusive glow-in-a-dark variant, Quickdraw Rattle Shake.

During development, Rattle Shake was originally designed as a zombie cowboy, with detachable legs, armed with normal pistols or phantom pistols and his Swap ability from the bottom was originally Dig. Another concept had his legs replaced with a serpent's tail made from remains and his ghost pistols would become a mini-gun made from bones;. In the end, Rattle Shake became anthropomorphic snake, with the difference that his snake gun was originally going to be two.[1]

Shake's enemies think he is sinister. In fact, so do some of his friends, but you can be sure that he's no slippery character - Rattle is a virtuous viper.[2]

Some say Rattle Shake was the best tracker in the Cloudbreak Islands. Others say he could strike the center of a gold coin at a thousand paces. But the legend of Rattle Shake was immortalized when he found himself trapped by the Black Hat Gang, the infamous group of cowboys who literally were large cows… and evil ones at that. They threatened to plunder the local village unless Rattle Shake led them inside the magical volcano Mt. Cloudbreak, where they hoped to discover enchanted treasure. Badly outnumbered, the ever calm Rattle Shake magically summoned every snake in the area and overtook the notorious bovines in an epic fight. The tale of his heroism was heard by Master Eon, who then recruited him to the Skylanders. 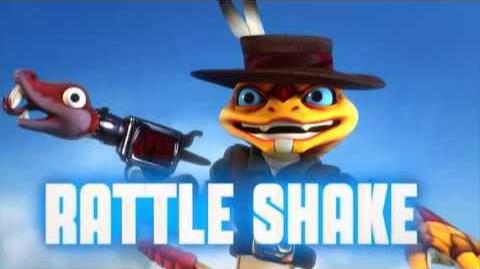