Ramses is the Dragon King of Dragon's Peak in the console versions of Skylanders: Spyro's Adventure. He is the brother of Vathek, an evil Undead dragon.

Ramses is the greatest leader Dragon's Peak has ever known, having ruled the lands for centuries with peace and harmony. He was the first (and quickest) to sit on the Dragon's Throne when the Dragons' political system became too complicated, becoming the most qualified to lead.[1] While governing the Peak as king, Ramses kept a watchful eye on his evil brother Vathek; a horrible dragon whom some fear may one day try to steal the Dragon Throne to rule as king.

One day, Flavius convinced Ramses to go flying with him. While they did, Ramses' evil brother, Vathek, sat on the Dragon's Throne, in which he who sits on the throne becomes ruler of all of Dragon's Peak. Ramses was then cursed by Vathek, and the old dragon was turned to stone.

After the Skylander defeated the minions guarding Ramses' stone form, the Dragon King awakened from the spell and informed the Skylander on how to reach Vathek. Ramses stayed behind due to the curse leaving him far too weak to fly. After Vathek was turned to stone by Flavius, Ramses returned to his position as king of Dragon's Peak and began to sadly wonder on what to do with his evil brother. Flavius mentioned that Vathek's stone form makes a 'good statue' and Ramses agreed, before questioning why Flavius didn't keep the Dragon's Throne for himself when the dragon knight had the chance. Flavius answered that Ramses himself is the only true king of Dragon's Peak until the day he decides to resign. Moved by Flavius' loyalty, Ramses mentioned that on that day when he is done with the Dragon's Throne, he knows exactly who will take his place. The Dragon King thanked the Skylander for their help, and had Flavius return them to the Ruins. 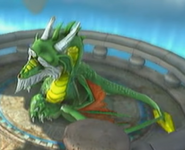 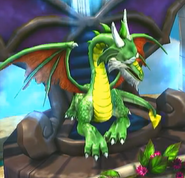 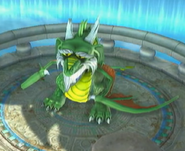 Retrieved from "https://skylanders.fandom.com/wiki/Ramses?oldid=124521"
Community content is available under CC-BY-SA unless otherwise noted.