Quigley is a young Mabu child in Skylanders: Spyro's Adventure who, when interacted with, has contextual speech depending on the player's current Skylander. He is the son of the Mabu Royal family on the Shattered Island, and after being rescued, he can be seen wandering around the Ruins from here on out. 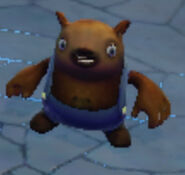