Punk Shock is a anthropomorphic eel who is one of the Water core Skylanders in Skylanders: Swap Force.

During development, Punk Shock was originally male and resembled more like an amphibian. As her method of attack, she would use a long electrified tongue, a can of worms and a fishing rod as weapons, or could summon a water snake. Punk Shock was soon designed as female, but there were other options for her main weapon, like the fishing rod, a scepter, a spear, an electric guitar and an electric bow. There were also other design choices for her facial design and hairstyle, before her final design remained and a different color scheme was chosen.

Her electrical traits originated from the scrapped Skylander, Krayken. [1]

Punk Shock is a natural rebel. She is simply shocking when it comes to being told what to do. She dislikes acting in any way like a princess.[2]

Daughter to the most royal family in Wondrous Waters, Punk Shock never really accepted her role as an undersea princess. She preferred a much more exciting life - hunting with her electric crossbow and listening to super-charged music. After journeying to the outer reaches of her kingdom to find adventure, Punk Shock returned home to discover adventure had found her. The kingdom and its people were magically frozen by the Snow Trolls, who were there to steal valuable treasure. Punk Shock used her awesomely charged crossbow to single handedly defeat the Snow Troll army and melt the ice that trapped her kingdom. Gill Grunt heard of the battle and quickly recruited Punk Shock into the Skylanders.

Punk Shock can fire electrical arrows from her electric crossbow. She can also throw water bombs that can be electrified with her Spark Shots. Being an electric eel, she can also shock her enemies. 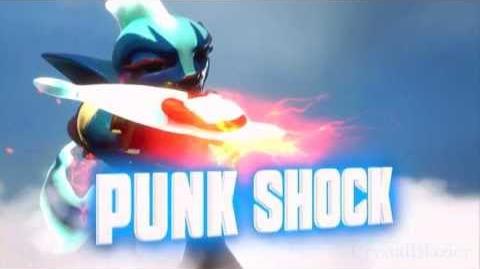 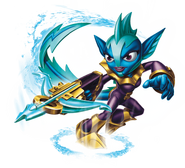 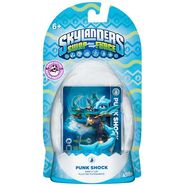 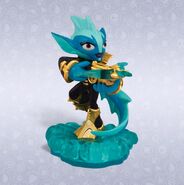