Skylanders: Spyro's Adventure
The Portal of Power is a pedestal used to transport the Skylanders, who are frozen as toys in our world, into the world of Skylands, connecting to the player's console of choice and bringing the toys to life in the game.

The original portal from Spyro's Adventure and Giants was originally limited to read up to four figures at max. With the Introduction of the SWAP Force Skylanders, which are considered as two individual pieces, the Portal of Power was redesigned and upgraded to allow more room for the toys as well as being able to read more figures at once, such as when using two SWAP Force figures and a Magic Item all at the same time.

In Skylanders: Trap Team, new version dubbed the Traptanium Portal was created to include the Portal Villain Vault and a Trap slot for capturing Villains as well as use them in battle.

A Portal of Power can also be used as a viewer, giving Portal Masters the ability to seek out locations and characters of interest -- allowing the Skylanders to know exactly where to go. In Skylands, the Portal of Power serves as a transport pedestal to take the Skylanders to other areas or distances through the power of a Portal Master. Though in most cases Skylanders can be transported instantly to an area in the Portal Master's sights, additional regular travel may be needed for unknown or unreachable locations, and Portals may be built on an area to remedy that (as seen in Boom Town and the Eternal Archives).

During the events of SuperChargers, Kaos used The Sky Eater to cut off the portal connection between Skylands and other worlds, including Earth, rendering the Portals useless. The Skylanders were able to bypass this disadvantage by using the Rift Engines within the SuperCharger vehicles to create rifts to transport them around Skylands and other worlds. The Sun Runner was also built to retrieve objects lost in The Portal Network.

In Skylanders: Battlecast, the portals are rectangular and used for combat instead of transportation. They are capable of a Portal Blast that unites the eight original Elements' power for a Non-Elemental spell, and Portal Rupture temporarily destroys the portal to randomly attack enemies with energy blasts, though it appears to immediately regenerate itself.

In Skylanders: Ring of Heroes, the portals are once again redesigned, having the size of the original Spyro's Adventure portals, but bear a more futuristic appearance, and are worn by the Portal Masters as a medallion/amulet.

To bring the toys into the game of Skylanders, you'll need the Portal of Power. You'll simply place the toy in the center of the Portal and instantly the character will appear in-game. This circular device glows different colors according to the elements of the characters and has the ability to recognize two characters placed on it at once to allow for multiplayer. LightCore figures or Giants will light up as long as the portal is turned on, even if the game isn't running.

A compatible Portal of Power is included with the respective game's Starter Pack, and may or may not work in other games depending on its version compatibility. 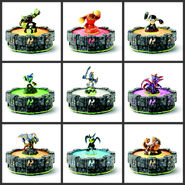 A comparison between the first two portals 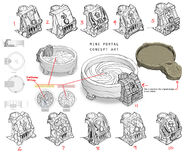 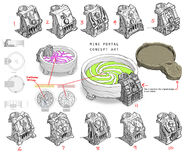 A comparison of the original and modified rift engine portals.

A Portal from the Second Dimension in Skylanders: Battlecast

The Portal Master, back on Earth, realizing their Portal is activated.