Pet-Vac is the Mini version of the Air Skylander, Jet-Vac. He made his debut in Skylanders: Trap Team.

Pet-Vac is an honorable soldier who gladly puts the needs of others before himself. His bravery and heroism earned him the respect of his teammates.[1]

During the day of their graduation, Pet-Vac was placed as team leader of the Minis by Master Eon. During a training simulation test, Pet-Vac was stuck at the decision between saving Gill Runt or stopping a virtual Super Evil Kaos, losing Gill Runt in the process. Because of this hesitation, they failed the test when Kaos overwhelmed them with magical lava. Master Eon ended the training and reassured Pet-Vac that Skylanders aren't always expected to win, but the young Sky Baron would have to make hard decisions one day.

The Minis tried to help Pet-Vac by going through the books in the Academy Library to boost his confidence in being team leader, but stopped when Mini Jini alerted her friends that the Doom Raiders have taken over the Academy and turned all the adult faculty into gold statues. Thanks to the Minis' encouragement, Pet-Vac formulated a plan by having half of the Minis lead Wolfgang and Dr. Krankcase into a trap while the young Sky Baron secretly went after the Golden Queen. He managed to swipe the Queen's golden egg and evade her, but was forced to come out of hiding when The Gulper, in his massive size, had captured all of the other Minis. Not wanting to bring harm to his friends, Pet-Vac willingly gave the Golden Queen back her golden egg, but used his vacuum gun to suck the Queen's staff into his possession, using it to turn The Gulper to a golden statue and freeing the Minis. The Golden Queen was forced to surrender when Pet-Vac threatened to turn her into a statue, ending the Doom Raider threat. During the graduation ceremony, the Minis, including Pet-Vac, were officially declared full-fledged Skylanders for their efforts.

Skylanders Power Play Pet-Vac
Add a photo to this gallery 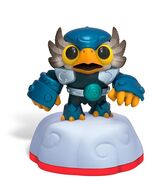 Pet-Vac in game
Add a photo to this gallery

Retrieved from "https://skylanders.fandom.com/wiki/Pet-Vac?oldid=109428"
Community content is available under CC-BY-SA unless otherwise noted.