Pain-Yatta is an aggressive and vengeful creature, taking out his frustration of being rejected by the Doom Raiders in his attempts to rule Skylands no matter how many would be harmed by his candy army. However his backstory and Ring of Heroes show he's gullible, and was easily tricked by the Doom Raiders into believing the Skylanders were responsible for the disappearance of his best friend, the Unocorn; and later by Kaos.

In Imaginators, however, he seems to have become more carefree and mocking, treating his fights like a party, though he takes his responsibility in protecting Skylands very seriously.

Pain-Yatta encountered the Skylanders at Telescope Towers, where he got into a brawl with them. In the end, he was beaten and trapped.

After his capture, the Skylanders took him and Chomp Chest to the Secret Sewers of Supreme Stink for their Villain Quests, along with fighting some of the local mutants and Goo Chompies along the way. His Villain Quest was with one of the Skaletones, Bag O' Bones, called "I'm With The Band". He then explained to the heroes that he was the manager of the Gecko Chorus along with a few other bands, and that the geckos had just finished their latest single that they wish to deliver to the Capybara King, but they had to cross enemy lines and trusted only Pain-Yatta as an escort. After successfully delivering the gramophone to him, he was awarded with Bag O' Bones' gratitude, the Rubber Glove Hat, and a new outfit.

Pain-Yatta captured and witnessed Spotlight and Blackout breaking out of his massive pinata using the elements of Light and Dark. As the two Skylanders flew off to report to Master Eon, Pain-Yatta announced his plans of a "candy catastrophe" that the Skylanders wouldn't be able to stop it in time.

Rejected by the Doom Raiders, Pain-Yatta formed his own plan to rule Skylands. He used the elements of Light and Dark siphoned from Spotlight and Blackout to construct and power an army of candy warriors, which emerged from various pinatas around Skylands and began terrorizing the inhabitants. When the Light and Dark Skylanders, Spotlight, Blackout, Knight Light and Knight Mare came to the Arkeyan ruins to investigate, Pain-Yatta confronted the heroes and overwhelmed them by unleashing a wave of candy.

Pain-Yatta imprisoned Spotlight, Blackout, Knight Light and Knight Mare inside a massive pinata version of himself as he prepared to lead his candy army in their victory over ruling Skylands. Knowing that he had used the energies of Light and Dark to power himself and his candy army, the villain was confident that the four Skylanders wouldn't dare to try and escape using their powers otherwise they would make Pain-Yatta stronger. However they overloaded the giant pinata with their Light and Dark abilities, causing it to explode and allowing the four Skylanders to escape. As he absorbed the Light and Dark energies released from the blast, Pain-Yatta gloated that the Skylanders only made him and his army more powerful than ever. Suddenly the villain became sick from absorbing too much energy, and his candy army all across Skylands crumbled to pieces as a result. In an attempt to drown the Light and Dark Skylanders in candy, Pain-Yatta could only muster the energy to cough up a single piece of candy, allowing the Skylanders to easily apprehend the weakened villain.

Pain-Yatta makes an appearance in both the SuperVillain Cup of Skylanders: SuperChargers and the Wicked Tour of Skylanders: SuperChargers Racing, where he drives two near-identical piñata-based vehicles with a hippopotamus-like design. He uses a Land vehicle in the SuperVillain Cup, and a Sky vehicle in the Wicked Tour, where he replaces Lord Stratosfear as a playable Villain. Unlike his Land vehicle, his Sky vehicle is comically small, and has additional pig-like piñata rockets attached to its sides in order to achieve flight.

Escaping prison through unknown means, Pain-Yatta fled to Rainbow Valley, and was discovered by Kaos. After his rifts created the Shattered Islands and he lost the Book of Dark Magic, the Dark Portal Master tried to hire Pain-Yatta as a Doom Raider on their behalf - not knowing that he was used to further their plans - and promised candy and a high ranking if the piñata found the book and dispatched any Skylanders that he came across. However, after fighting them recklessly and being defeated, Pain-Yatta realized that he was fooled by the villain, and decided to stay on the side of the heroes.

Growing up, Pain-Yatta's best friend was the legendary Unocorn, a unicorn with a churro-horn that sprinkles magical cinnamon from time to time. While the cinnamon donuts for breakfast were incredible, being so sweet and delicious made them both easy targets for those looking for yummy treats. But Pain-Yatta had no problem protecting the both of them with his giant sucker! One day, however, the Unocorn went missing, and Pain-Yatta was beside himself. He tried desperately to find his buddy, but to no avail. That's when the Doom Raiders tricked him into thinking that the Skylanders were behind it all, and Pain-Yatta fell for it hook, line and sinker. He joined up with the band of villains and ventured out to get revenge on the Skylanders, but was eventually captured by the Trap Masters. Master Eon explained that the Skylanders had nothing to do with the Unocorn's disappearance and said he would help Pain-Yatta find his friend, if he became a Skylander Sensei and trained new Imaginators in the ways of smashing! Pain-Yatta agreed and the search for the missing Unocorn continues.

In Trap Team, when used as a trapped villain, Pain-Yatta wields a giant lollipop, which he uses to smash his enemies with as his main attack. His secondary attack makes him spew out large amounts of candy from his mouth at targets. He usually spits out a piñata as well during this attack - hitting the piñata with the lollipop will make it explode. During his boss fight, he only uses lollipop attacks, which however have a greater area and create an expanding shockwave.

In the IDW Comics, at one point, he was able to create piñata warriors using the elements of Light and Dark. With this, he can empower himself and his army of candy soldiers to become stronger. However if too much energy is consumed, Pain-Yatta will become sick.

Like one would expect from piñatas, in Skylanders: Battlecast, hitting him will cause candy to fall out in the form of cards. However, he can also use it to his advantage, using its properties to force the opponent and himself to draw more cards, and then use several spells that cause more damage depending on how many they have.

In Imaginators, Pain-Yatta retains his traditional attacks of lollipop slam and candy breath but now uses a variety of candy weapons with different attacks every time his current lollipop breaks. Pain-Yatta's traditional sucker causes a shockwave when broken; his pink lollipop leaves a candy pool which slows down enemies; his candy cane leaves dangerous shards on the ground. Combining the candy pool and shockwave will stun enemies. Additionally, he can summon miniature piñatas that distract enemies, then target them to explode. Upon taking damage, Pain-Yatta drops candy that restores health when picked up. Despite his bulk and size, Pain-Yatta is surprisingly nimble, allowing him to walk and smash with surprising speed.

His Soul Gem causes him to brandish a mariachi hat and two maracas, allowing him to drop explosive piñatas from the sky. Pain-Yatta's Sky-Chi allows him to hang himself by a string and hit himself, dropping candy that damages enemies. 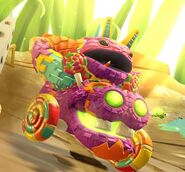 Pain-Yatta driving a sky Vehicle in SuperChargers: Racing
Add a photo to this gallery 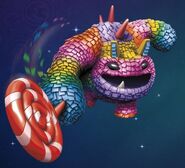 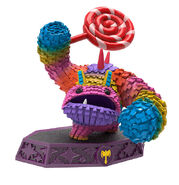 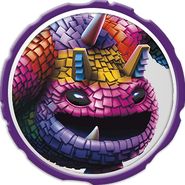 Pain-Yatta Icon
Add a photo to this gallery

Retrieved from "https://skylanders.fandom.com/wiki/Pain-Yatta_(character)?oldid=117805"
Community content is available under CC-BY-SA unless otherwise noted.