The Kaos Trap
Rift into Overdrive

Ninjini is a Magic ninja genie, and one of the eight Giants in Skylanders: Giants. She has an alter ego called Scarlet Ninjini.

Ninjini used to have a human-like skin color and blonde hair, and wore shorter clothing such as a crop top, frilly skirt and exposed upper arms.

An eternal optimist, Ninjini spins into battle, convinced she will always succeed come what may.[1]

Ninjini was the most renowned magical ninja from ancient times, long before the Arkeyans rose to power. But a dark sorceress, who was jealous of Ninjini's skill as a warrior, trapped her within an enchanted bottle to be imprisoned for all of eternity. Time stretched on, yet Ninjini remained steadfast and determined to escape - even mastering the dual sword technique within the solitude of her bottle. Over the years, her strength continued to grow until alas, through sheer force of will, she broke free! From that moment on, Ninjini made it her mission to help those in need as one of the first Skylanders, always carrying that enchanted bottle as a reminder of her own resilience.

As a ninja with command over the Magic Element, Ninjini was a real force to be reckoned with back before the Arkeyans came along. Her skills, power and snazzy hairstyle drove an evil sorceress mad with jealousy, and using dark magic the sorceress trapped Ninjini inside an enchanted bottle. There she remained for years and years, but she didn't waste a single moment. Instead, she spent her time getting more awesome by the day, developing her Magic abilities and learning how to skillfully wield double swords. Eventually she became too powerful to contain, and managed to squeeze her way free of her enchanted prison. She swore then to use her Magic, ninja skill and massive size to protect Skylands from those would do it harm.[2]

Ninjini was helping Spyro and Stink Bomb battle against a raid of Drow in an unknown area of Skylands. When Hugo called upon them to assist Stealth Elf, Pop Fizz and Wash Buckler on a Level 13 threat, Spyro's team was unable to help out as they were tied up with their current situation.

Ninjini is a powerful Giant who can summon her ninja swords out of thin air to fight in close combat, she can create magical orbs to attack from afar, and hide inside her bottle for faster movement, more endurance and homing attacks such as magical rockets and enchanted mist which entrances enemies.

In Skylanders: Battlecast, hiding inside her bottle gives many bonuses to her spells, though she will break free to attack. Her Special Ability is the Genie's Hideout itself, and her signature Gear is the Star Shell Stopper, magical bombs that only activate when she is in the bottle. Ninjini's scrapped seventh ability, is Blast Wish, would attack an enemy and put her back into the bottle without the need of the ability. 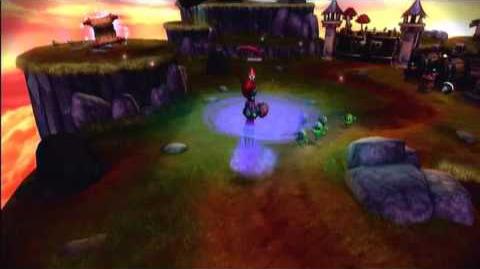