Skylanders: Trap Team (3DS)
The Nightmare Villains are a group of villains that appear in the 3DS version of Skylanders: Trap Team. They are led by the Dream Sheep and have been unleashed into Skylands after Hugo read from a cursed book in the Eternal Archives.

Only Nightmare Villains can access their own respective Villain Bootcamps in order to obtain a Gem Key or free a Sage of Waking. 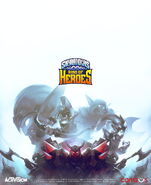