Night Shift is an Undead vampire boxer who is one of the SWAP Force Skylanders in Skylanders: Swap Force. His Swap Force Ability is Teleport.

Night Shift can come off a bit grumpy, due to being an Undead character. He values boxing, and is commonly considered by others as old-school. Whenever he hears the sound of a boxing bell however, he goes into a wild frenzy, punching anyone and anything around him. Night Shift always plays by the rules, so when the Skylands Boxing Federation banned Teleportation, he had to give up the sport he loved.[1]

From high up in the gloomy Batcrypt Mountains, Night Shift was a full-fledged baron and heir to a great fortune. But one day, he decided to leave it all behind to pursue his dream as a prizefighter. It wasn’t long before Night Shift became the undefeated phantom-weight champion of Skylands, famous for his massive uppercut and for having once bitten an opponent in the ring. Unfortunately, a rule change made teleportation illegal and Night Shift was forced to give up his belt, officially ending his career as a boxer. Crestfallen over being disqualified from a sport he loved so dearly, his spirits picked up when he was sought out by Master Eon, who told him that his skill as a fighter could be put to great use as a member of the Skylanders.

Night Shift was the voice of reason to Bouncer and Trigger Happy. When Blades was showing signs of ruining the mission to stop the Machine Magus, Night Shift convinced an irritated Bouncer that the young dragon would learn from his mistakes, but the former boxer himself hoped that he wasn't making a large mistake. Tensions rose when Blades knocked out the leader of a group of Drow who would've told the Skylanders where to find the Machine Magus. Night Shift and Bouncer scolded Blades for his actions and tried to explain to the young dragon about the value of being in a team. However, Blades shrugged off their words and claimed that he didn't need anyone's help.

When Blades went off to face the Machine Magus on his own, Night Shift, Bouncer and Trigger Happy followed suit after realizing that Blades may be fighting a losing battle. They managed to rescue Blades before Magus could finish him off, and with their combined efforts as a team, the Skylanders defeated the Drow. After the mission, Night Shift's sound judgement came true as Blades apologized for his behavior and the Skylanders officially welcomed him into the team.

The Proper Vampire path is the choice for the players who are survivalists. This path further upgrades Night Shift's Vampire Bite ability, allowing him to, when fully upgraded, regenerate 30 HP by biting an enemy and deal Damage-Over-Time Damage with a single bite. Note that, no matter how many enemies Night bites with a Vampire Bite, it will always regenerate 30 HP.

The Prize Fighter path is the choice for players who want to amass a horde of gold and generally upgrade their Night Shift's uppercut ability. The Pay Day upgrade also gives his boxing gloves a gleaming, golden sheen.

The Warping Vortex path further upgrades Night Shift's teleportation ability, allowing him to, when fully upgraded, create a vortex that pulls in enemies. The Close to Doom upgrade allows this vortex to deal damage, although the damage is small. This path is primarily for crowd control, allowing the Skylander to pull together many enemies that would otherwise take too long to defeat one at a time, or to pull away enemies that are too dangerous to deal with at the moment.

The Underbat path improves Shift's survivability, allowing the Skylander to be revived upon defeat twice. This is a path for true survivalists who want to tank through the masses of enemies with as little losses as possible. 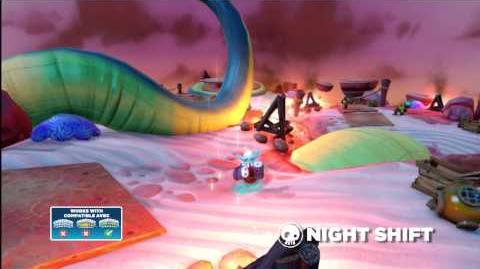 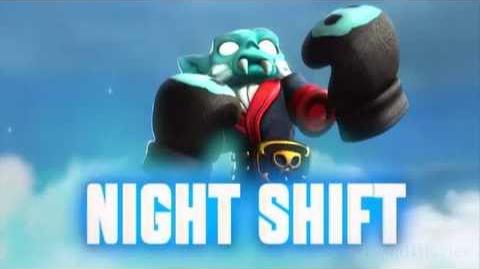