Nefarion, also known as the Nightmare King, is the main antagonist in Eruptor Meets the Nightmare King. He was an evil tyrant responsible for the creation of the Mask of Power, kickstarting the events that would lead into the book series.

Thousands of years ago, Nefarion was a pampered, young prince who was never taken seriously, even when he was crowned king. He ordered a guild of Spell Punks to create the Mask of Power, which Nefarion used to terrorize Skylands for hundreds of years. During his reign of terror, he banished the Skylanders of the time, enslaved all of Skylands and hunted down the Portal Masters one by one. Before Nefarion could wipe them out completely, he was defeated, imprisoned in eternal winter along with his kingdom and ending his conquest.

The evil Portal Master, Kaos, was able to go back in time to the era when Nefarion ruled over Skylands and allied himself with the Nightmare King. Posing as Nefarion's slave, Kaos helped expose and capture the last remaining Portal Master, Wizbit, who planned to use a Big Bad Ice Bomb to imprison Nefarion in his domain. Once Eruptor, Grim Creeper and Slam Bam were buried alive in a cave-in triggered by Kaos, Nefarion returned to his castle with Wizbit and was presented with the Big Bad Ice Bomb from Kaos and Glumshanks. However, Nefarion had heard the ticking sound inside the bomb and realized that Kaos was going to freeze him in his own castle as well, to which the evil Portal Master proudly admitted immediately afterwards.

Refusing to hand over the Mask of Power, Nefarion attacked Kaos, but the clever Portal Master used a spell to summon a multitude of clones of himself to confuse the Nightmare King. Kaos was then able to take the Mask of Power off Nefarion's face, reverting him back to his true form: a squat, childlike boy. During the struggle between the Skyanders and Kaos, Nefarion could only watch as the Mask of Power was shattered into eight pieces and scattered across Skylands by Wizbit. When the Big Bad Ice Bomb was about to go off, Nefarion fled from his castle to escape the incoming explosion. His whereabouts in the altered timeline are unknown.

Master Eon eventually reveals that, after his escape, Nefarion was captured and put back in the ice prison that became his castle, with the population of Portal Master never returning to the same as before Nefarion's rule. 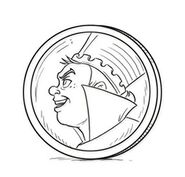 Master Eon and the Skylanders standing before an old statue of an imposing, tall version of Nefarion in Eruptor Meets the Nightmare King 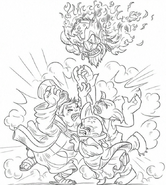 Kaos, Glumshanks and the young Nefarion scrambling to catch the Mask of Power

Nefarion as depicted in Skylanders: Ring of Heroes