Mini-Jini is one of the four Sidekicks in Skylanders: Giants. She is the miniature version of the giant Ninjini, eventually becoming a Mini Skylander in Skylanders: Trap Team.

Mini-Jini always looks on the bright side of life. She believes in the power of positive thinking, and her good energy is infectious. Mini Jini is least likely to put a curse on everyone, as she the nice kind of genie.[1]

Meet the Skylanders Mini-Jini
Add a photo to this gallery 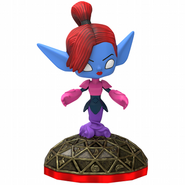 Mini-Jini's toy form.
Add a photo to this gallery

Retrieved from "https://skylanders.fandom.com/wiki/Mini-Jini?oldid=102055"
Community content is available under CC-BY-SA unless otherwise noted.