“I'm the one who pulls your strings!”
—Mesmeralda

Mesmeralda is an evil, spider-like puppeteer in Skylanders: Swap Force. She was enlisted by Kaos' Mom to stop the Skylanders atop the Frostfest Mountains and capture the Frosthound.

As an evil puppeteer, Mesmeralda can conjure bombs and moving scythes in clown-like attire. She can manipulate her Puppet Chorus to attack her foes in a zigzag-like pattern. She can also conjure a large pair of her hands in close or far places, they are even strong enough to restrain the Frosthound. She is capable of creating puppets out of thin air, and she was shown to have telekinesis in one cutscene, as she was capable of levitating several plates of food. In the Skylanders mini comic, Biting Back, it is shown she could create voodoo puppets which control the mind and movements of whoever the puppet is based off of.

Mesmeralda appears in Skylanders: SuperChargers Racing as an unlockable racer. She, along with her vehicle the Wave Singer, are unlocked through progressing through the Nefarious Tour.

As a racer-vehicle combo, Mesmeralda boasts the best Top Speed of all the Sea Racing Action Pack villains. Her Acceleration is also great, as is her Armour. She is let down by her decent Handling and sub-par Firepower. Her stat combination makes her ideal for high-speed races and time trials.

Mesmeralda first appeared as one of the guests Kaos' Mom brought with her to Kaos' Kastle. She was later tasked with capturing the Ancient Frosthound atop the Frostfest Mountains and deal with the Skylanders. The evil puppeteer made her grand entrance to the Skylander atop the mountain and proceeded to do battle with them, though thinking the fight is a stage performance with herself as the star. Despite the attacks of her Puppet Chorus and other hazards, the Skylanders eventually bested Mesmeralda in her own show.

In Skylanders: SuperChargers and SuperChargers Racing, she does not appear in the main story, but is a playable villain racer that is captured via Boss Pursuit. Her vehicle is the Wave Singer. 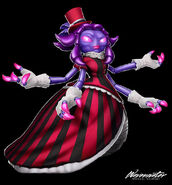 Mesmeralda's vehicle
Add a photo to this gallery

Retrieved from "https://skylanders.fandom.com/wiki/Mesmeralda?oldid=126741"
Community content is available under CC-BY-SA unless otherwise noted.