Masker Mind is a ghost-like creature who is one of the Undead villains in Skylanders: Trap Team. He is found in Rainfish Riviera, possessing a Bomb Shell before turning his attention to the Skylanders. The evil spirit is eventually driven out of the defeated enemies and is chased down and defeated.

Masker Mind can possess surrounding enemies to make them fight for him, as well as use mind control. He can also fire telekinetic bursts to push his opponents back. He was shown to have the power to teleport when he was first encountered. In Skylanders: Battlecast, under Krypt King's power, Masker Mind can be summoned from his trap as a Relic, and can lure weak enemies into being brought in and attacked. 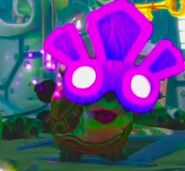