Mags is an Undead supporting character in Skylanders: Trap Team and Superchargers. She is the inventor of every cool gadget in the Skylanders Academy, as well as about 87 million other things.

Mags is an inventor and architect who resides in the Skylanders Academy, and one of the main supporting characters. She is really handy with technology, very confident, a bit stubborn, not easily scared and somewhat sassy.

Mags assisted the Skylanders in their quest to stop the Doom Raiders and other villains. As the story progresses, she installed new areas and machinery to the Skylanders Academy. She later guided the Skylanders to Rainfish Riviera so that they can retreive Mags' Information Squid to learn more about the villains, after retrieving the squid it turned out that it was Kaos who shapeshifted to look like the squid. Mags later took part in the aerial assault on the Skyhighlands with a blue Arkeyan War Machine and later returned a golden statue of Cali to normal using her De-Goldifier. After transporting the Skylanders to Sunscraper Spire with her teleportation device, Mags stays behind at the Viewing Platform. However the Light Doom Raider, Luminous, took on the form of Mags to trick the Skylanders into unlocking the seals to the main tower that imprisoned him.

Mags attempted to help find the cause of Spyro's weakened state with her machine at the Skylanders Academy, but the readings tell that there was nothing wrong with him. When it was discovered that a fairy named Calliope had stolen the powers of Spyro and Hex, Mags volunteered to help find the fairy with Flynn.

When Spyro, Cynder, Hex and Wallop were imprisoned in the Cadaverous Crypts by Malefor, Mags and Flynn found and freed the Skylanders in the caves after following Calliope's magic signature. Mags soon assisted Spyro, Cynder, Hex and Wallop by trapping Malefor with her Atomic Gumballs, allowing Hex to redirect the Dread-Yacht to crash into the evil dragon. When Malefor remained unscratched from the blow, Spyro instructed Flynn and Mags to find someplace to hide while the Skylanders battle the Undead Dragon King.

When Gearshift was ambushed and heavily damaged by Pain-Yatta's candy soldiers, Mags did the best of her ability to repair the Trap Master and succeeded. She insisted Gearshift to remain at the Skylanders Academy to undergo a complete repair job, but Gearshift believed there was no time as Pain-Yatta's army had to stopped.

Mags helped the Skylanders and SuperChargers in their fight against Kaos' Sky Eater by fixing the Skylander's vehicle, popping the Kolossal Kernel, updating the Core of Light and working on the Dark Rift Engine. Not long after that, she was kidnapped by Sky Bandits lead by Blubberbeard who planned to use Mags' skills to upgrade their Bandit Train in order to escape Skylands' destruction. She was soon rescued by the Skylanders and their allies, though.

Mags once again lent her assistance to the Skylanders by directing them to a few areas around M.A.P. She also created a robot called C-MOR who shows you around the area. In the Abandoned Amusement Park, Mags later created a rocket to transport the huge cake baked to fool Kaos. With Eruptor's help, the Skylanders were able to stop the rats from eating the cake.

In the Thumpin' Wumpa Islands Adventure Pack, Mags accompanied Spyro to the Synchronization Celebration on Wumpa Island, the home of Crash Bandicoot and Aku Aku. On their way to there, however, Crash's arch-nemesis, Dr. Neo Cortex, was planning another evil scheme with his latest invention, the Cortex Matrix Chamber, to "have an unstoppable army of loyal minions", as he puts it. Unfortunately for him, Fake Crash decided to hijack it which caused the machine to go haywire and spread Bad Vibes through horrible dancing, sending Cortex rocketing towards the start of the main island. Though reluctant to trust Cortex, he, Mags, Aku Aku, Crash and Spyro work together to get rid of the Bad Vibes. 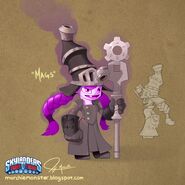 Mags arrives at the Sunscraper Spire

Mags with Sharpfin in Skylanders: Superchargers

Retrieved from "https://skylanders.fandom.com/wiki/Mags?oldid=120987"
Community content is available under CC-BY-SA unless otherwise noted.