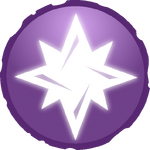 Magic is one of the ten main elements introduced in the Skylanders series. Being the most essential of all the initial eight Elements, Magic flows through everything and every other Element would be rendered powerless without its presence.[1] This element is associated with magenta, violet and violet-blue, and several other shades of purple.

Magic is the force that binds all of Skylands together. The history of Magic can be traced back to before the Arkeyans. They discovered that a substance called Quicksilver was the very essence of all magical being. They harnessed the power of Magic and combined it with technology to create huge and powerful weapons of war.[2]

The Magic element played a part during the battle between the Skylanders and Kaos's minions. When the Core of Light was destroyed by the Hydra, the Skylanders weren't destroyed by the explosion. By the power of Magic, they were banished in balls of light and jettisoned from Skylands into space. As they hurtled through the unknown, they shrank and froze in time before landing on Earth, where they found new Portal Masters to aid their cause.[3]

The Quicksilver is the energy that flows through all things magic. It is an ancient oil that is essential to Magic within the Core of Light and must be used to bind every other element together.

Skylanders and enemies who are associated with this element use the art of sorcery, illusions or magical powers to take down their opponents. Even though they are stronger against those of the Undead element, characters who wield the Magic element are weak against characters who have the element of Tech in the Battle Arena. When in their toy form, most Magic-based Skylanders stand on a bronze pedestal that is marked with stars and moons. In Skylanders: Ring of Heroes, the Magic element is strong against Undead and Air, but weak to Water and Tech.

Rare Purple Dragons, like Spyro, have the ability to harness the Magic element to manipulate the other elements of Skylands. Spyro, however, prefers to master the element of Fire.

In Turret gameplay in Skylanders: Trap Team, Magic Skylanders have the elemental ability Spellbind, that temporarily stops enemies in place. In Kaos Doom Challenge, their elemental tower is a magical cauldron that fires explosive vials, that can be upgraded to have long-range homing shots, a magic circle and an exploding potion bottle that poisons enemies.

In Skylanders: SuperChargers, the Magic-aligned Portal Master Powers include reflective energy shields and the ability to daze enemies. Those are distributed in several conditions, and the names are as follows:

Magic Imaginators can choose from four different abilities as their secondary attack:

Playing multiple spells and gaining more and more is the nature of Magic Spells. Many attacks require one played previously, and others use energy drawn from them as an attack. An enemy fighting against a Magic user must be wary of its abilities to copy the opposing team's spells, and how quickly the team can gain ranks by combining cards.

The scrapped team spell for this element is Mysteries of Magic, a low energy spell where the player gains a spell for each Magic character on the team using a mysterious obelisk. 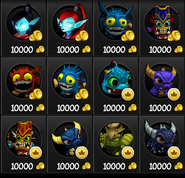