Armored Life Spell Punks wear protective armor and are the only type of Spell Punk to wear this variant.

In Skylanders: Swap Force, they still heal enemies but if you defeat the enemies first, they will shoot a blast of Life energy from their hands.

In Skylanders: Battlecast, Life Spell Punks have the ability to Seedcraft, summoning two Life Elemental Spell Cards, and always carry a Seed Wand, which allows them to attack alongside such spells. 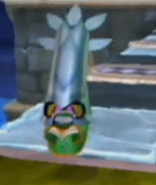 Retrieved from "https://skylanders.fandom.com/wiki/Life_Spell_Punks?oldid=125216"
Community content is available under CC-BY-SA unless otherwise noted.