Legendary Spyro is a rare counterpart of Spyro. He is only available in the Legendary Pack along with other legendaries, Legendary Chop Chop and Legendary Bash.

In the United States, the legendary three pack was sold exclusively through the Toys R' Us chain of toy stores for a limited time.

Much like his normal counterpart, Legendary Spyro can charge at his enemies and knock down obstacles with his horns whilst infusing them with the element of fire. Being a dragon he also has the ability to fly.

His upgrades are also the same as normal Spyro. 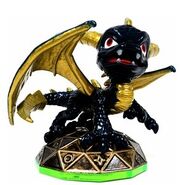 Legendary Spyro's toy form
Add a photo to this gallery

Retrieved from "https://skylanders.fandom.com/wiki/Legendary_Spyro?oldid=64250"
Community content is available under CC-BY-SA unless otherwise noted.