Not to be confused with Legendary/5 Star Skylanders in Skylanders: Ring of Heroes.

Legendary Skylanders are stronger versions of regular Skylanders in the Skylanders series, though they have exactly the same upgrades and Heroic Challenges. They all commonly take on the color schemes of navy blue and gold, although the Legendary Senseis instead wear prestigious Legendary red and gold armor.

For centuries, Skylanders have competed in gladiator-style events inside epic arenas of sport, where only the greatest of combatants become immortalized as magical, golden statues that stand and watch as guardians. These are the Legendary Skylanders. Whenever the world is in peril, special Portal Masters can bring these statues to life and summon the Legendary Skylanders to defend Skylands against any evil that threatens it. 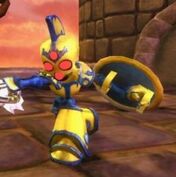 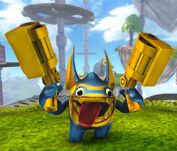 Retrieved from "https://skylanders.fandom.com/wiki/Legendary_Skylanders?oldid=113034"
Community content is available under CC-BY-SA unless otherwise noted.