Lava Lance Eruptor is the SuperCharger counterpart of Eruptor in Skylanders: SuperChargers. His signature vehicle is the Burn-Cycle.

Eruptor and Roller Brawl were the two SuperChargers who discovered Bowser and Donkey Kong after they defeated Blubberbeard and his legion of Pirate Henchmen. They then brought the newcomers to the Skylanders Academy where Buzz explained to them what was happening to Skylands and the worlds that connected to it.

Make the earth shake with this eruption based path!
Joust through your foes and blow them away with your lava spike lance! 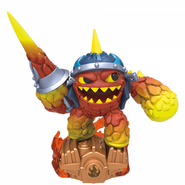