Lair of Kaos is the final level in the console versions of Skylanders: Spyro's Adventure. It is a flying thorned fortress that surrounds Castle Blackthrone, home to the evil Portal Master Kaos. Metallic claws can move on their own and lash down on passing Skylanders, and every enemy that they've faced in previous chapters lurk about the towers. 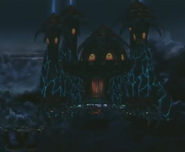 Castle Blackthrone
Add a photo to this gallery

Retrieved from "https://skylanders.fandom.com/wiki/Lair_of_Kaos?oldid=126274"
Community content is available under CC-BY-SA unless otherwise noted.