Krill Bills are anthropomorphic shrimp in Skylanders: Imaginators. They attack with their large swords, though they get temporarily stuck on the ground in the process. Despite working to defeat the Skylanders together, they appear to be the Tube Sharks' prey. 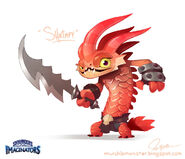 Krill Bill concept art, dubbed by Jeff Murchie as "Shrimpy".
Add a photo to this gallery

Retrieved from "https://skylanders.fandom.com/wiki/Krill_Bills?oldid=123775"
Community content is available under CC-BY-SA unless otherwise noted.