Knight Light is the Light Trap Master in Skylanders: Trap Team. He comes with the Sunscraper Spire expansion pack, but later came in a single pack.

Knight Light is described as pure, gallant, righteous and illuminating.[1]

Before the destruction of the Core of Light left him stranded in the Light Realm, Knight Light was the protector of the Starlight – the source of light, wisdom and vast energy in Radiant City. But an evil villain known as Luminous wanted the Starlight for himself. Without warning, Luminous attacked, and the two took to the skies in an epic battle which lasted several days. In the end, Knight Light stood victorious and Luminous was imprisoned within Sunscraper Spire so that he could no longer pose a threat to Skylands. Now with his Traptanium blade, Knight Light fights alongside the Trap Team to keep evil at bay!

Knight Light battled against Chef Pepper Jack and his group of Plant Warriors to protect a village of Mabu. Announcing his return to the realm of Skylands, the Light Trap Master defeated the Fire Doom Raider and his minions.

When Spotlight and Blackout were ambushed by Pain-Yatta's candy soldiers, Knight Light and Knight Mare came to aid their fellow allies after they contacted the two Trap Masters prior to coming to the Arkeyan ruins. During the heat of the battle, Knight Light openly blamed Knight Mare for both of them being late, and in response, Knight Mare claimed that Knight Light was the one responsible. Eventually the Light and Dark Skylanders defeated the horde of candy warriors, but were soon confronted by Pain-Yatta and became overwhelmed by his wave of candy.

Knight Light, Blackout, Spotlight, and Knight Mare became imprisoned inside Pain-Yatta's giant pinata to power him and his army of candy warriors during their impending conquest over Skylands. Should they use their powers of Light and Dark to try and escape their prison, they would only make Pain-Yatta and his army stronger. Eventually the Skylanders concocted a plan to overload the pinata with their powers, causing it to explode and allowing the Skylanders to escape. Despite absorbing the Light and Dark energies to empower himself, Pain-Yatta suddenly became sick from taking in too much power and his candy warriors around Skylands dropped to pieces, resulting in Pain-Yatta's defeat. At the Skylanders Academy, Master Eon congratulated the Light and Dark Skylanders for their efforts in saving Skylands once again with their Light and Dark abilities.

As Kaos' fleet of airships breached the perimeter around the Skylanders Academy, Knight Light, Bat Spin, Scratch, Boom Jet and Sunburn aided Wash Buckler's group in fending them off. However they were shocked to see more of Kaos' army in the form of a huge fleet of ships approaching them.

In Light in the Dark, Knight Light and Knight Mare displayed a sort of rivalry towards one another, quarreling in the midst of combat. Knight Light was quick to blame Knight Mare for causing both of them to be late in assisting Spotlight and Blackout. 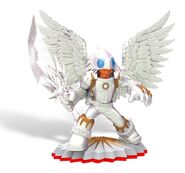 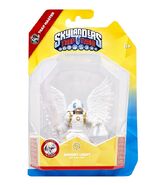 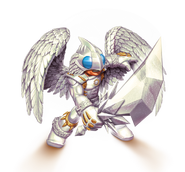 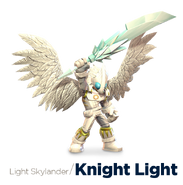 Retrieved from "https://skylanders.fandom.com/wiki/Knight_Light?oldid=114989"
Community content is available under CC-BY-SA unless otherwise noted.