King Pen is a Brawler Sensei in Skylanders: Imaginators, who also serves as the leader of the Skylander Senseis.

King Pen, being the leader of the Senseis and a Starter Pack character, was the most difficult to design.[2] The first concepts for King Pen, with the idea of a penguin warrior, didn't seem to be fighting-capable. So I-Wei Huang experimented with the idea of more focus on the character's upper body muscles. Weapons were also experimented along with wing blade armor, however, as they disrupted his shape, they made the blades his main weapons instead.[3] 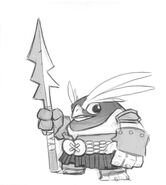 The initial concept for King Pen, described as "looking more than an NPC than a playable character". 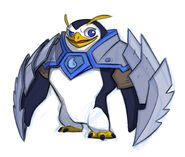 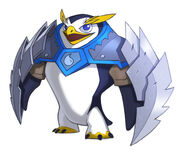 While penguins in reality have short legs, the same does not seem to apply to King Pen, whose legs are less stubby and have toes instead of webbed feet. King Pen has a large white-bellied torso that is covered with black and gold armor that reaches behind his head, with two black straps from front to back and a gold colored belt around his waist. He also dons large metal "Flipper Blades" in order to combat enemies and golden shoulder plating. He has a yellow beak, yellow eyes with black pupils, and wears a black helmet with a blue ponytail on the top.

King Pen hails from a militaristic unit of penguins who protect the Cloudmelt Glaciers. During an epic battle, King Pen was trapped in an avalanche and had to take refuge in a nearby cave for the remainder of the winter season. During his solitude, he was visited by a mysterious Yeti Master, named Snow Wah, who began teaching him an ancient combat style known as “Flipper-Fu”. King Pen was already a skilled fighter, but the wise teacher helped him to understand the spiritual and philosophical nature of warfare, turning the penguin into an unstoppable force. When he finally emerged from the cave, tales of his newfound abilities spread far and wide. When Master Eon caught wind, he recruited King Pen into his top secret training program, where he quickly rose up the ranks to become the leader of the Skylander Sensei. Years later, King Pen returned to the site of the avalanche to thank his teacher, but no evidence of Snow Wah or the cave was ever found – leaving many to wonder if the Yeti had ever existed at all.

King Pen can slash his enemies with his bladed wings, and even infuse ice into his attacks. King Pen can use his frost breath to leave a path of ice, and freeze his foes. King Pen can also perfrom a corkscrew dash which knocks enemies out of the way, and even create a huge snowball to launch at his enemies after the attack. King Pen is capable of creating a arena of ice to protect himself from attackers. 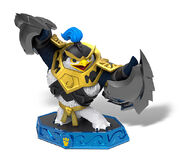 Retrieved from "https://skylanders.fandom.com/wiki/King_Pen?oldid=115428"
Community content is available under CC-BY-SA unless otherwise noted.