“Oh, you didn't really think Kaos was the strongest Portal Master on the side of darkness, did you?”
—Kaossandra

Kaossandra, usually refered to as Kaos' Mom, is the mother of Kaos and an antagonist in the Skylanders series. She never made a full appearance until Skylanders: Giants where she appeared in a family photo inside Kaos' Kastle. Later her silhouette briefly appeared in the end after the credits shortly after Kaos returned from being defeated by the Skylanders. Kaossandra makes her full debut in Skylanders: Swap Force as an evil Portal Master like her son.

Kaossandra has worn a dress that is similar to Hex's, only that it has some attributes that represent her title as a Dark Portal Master. The top half of the dress is a V-neck blouse with two collars: one half is black on the upper half of her body with pink rhinestones that forms half of the motif like Kaos' symbol on the forehead and splits on her lower body with deep pink thick borders and flares outward; the second half inside is a two-piece with gold lining that when folded together resembles a hood. The bottom half is a medium-length skirt with a veil behind it that also flares outward with deep pink borders. She also wears her hair with a pink jeweled hair net in a horn shape, a pink diamond above her forehead, magenta eye-shadow and lipstick a gold choker with a large pink diamond pendant that completes the motif, and black gloves that reach below her elbows with a pink diamond ring on one of the gloves.

Before battle, Kaossandra displays a warm aura and a nurturing tone of voice towards her opponent, speaking to them directly as if she were their actual mother, though not without a threatening and assertive tone when explaining her position. Towards her own son, however, she is rather abusive and constantly puts Kaos down over his failures of conquest, flawed schemes and ego. She believes her powers as a Dark Portal Master to be stronger than that of her son and that this makes her a better ruler of Skylands than Kaos as she was willing to underhandedly steal that from her son. However, she did display something close to pride for Kaos when he abandoned her in her mirror prison to fulfill his own plan.

Unlike her son, Kaossandra tends to treat her underlings rather well, such as playing Skystones with the Wilikin and spending quality time with Glumshanks (complete with tea and snacks) and her other underlings rather than taking out her frustration on them. She is also more focused on calculated efforts, sending out specific minions and using kidnappings, only relying on all-out attacks when pressured for time, such as the Fire Vipers in her attack to Mount Cloudbreak. However, she does not easily admit defeat, and spins her failed attempt at conquering the volcano as successful as the Skylanders were banished, even if not by her hand.

As stated by Kaos (and demonstrated by her first two "appearances" to him in Swap Force), she has a flair for the dramatic.

As a Portal Master, she possesses control over Portals in which she uses to teleport herself as well as hover. She also uses powerful dark magic, such as leviation, cause candlefire to explode, and telekinesis. Her most notable ability is her power to fire a beam of powerful dark magic from her hands, though this magic caused her to be imprisoned inside her own mirror when it was used against her.

Interestingly enough, she was already aware of, and capable of directly addressing, the new Portal Master.

Kaossandra often blamed Portal Masters for the problems in Skylands, and she wasn't happy when she discovered Kaos had Portal Master powers.[1] According to the Wilikins, Kaos's Mother used to play Skystones with them before she left. A brilliant strategist with a strong grasp of Dark Magic, she has nevertheless been unable to fulfill her dream of conquering Skylands - a fact that greatly frustrates her.[2]

Kaossandra had returned to her castle sometime during the events of Giants. When her son returned, she approached Kaos, and Glumshanks hid at the sight of her.

A hundred years ago, it was revealed that Kaos' Mom is a dark Portal Master and had launched an attack on the Cloudbreak Islands with a swarm of Fire Vipers at her command. The attack was repelled by the SWAP Force Skylanders, however the effort caused the Skylanders to be banished from Cloudbreak by the volcano's eruption and left the Islands unprotected for years.

Years later, Kaossandra contacted her son, Kaos, and soon scolded him for making his all-out invasion draw too much attention (an action which brought the attention of the Skylanders who had arrived to save the Cloudbreak Islands). She later came to Kaos' Kastle in person to help her son with his conquest, revealing to have gained the help of a few minions she had enlisted. When the Skylanders saved all the Ancient Elementals, Kaossandra interrupted the celebration and announced that their victory was far from over before saving Kaos (who was captured after his attack on the Fantasm Forest) and kidnapping the new Chieftess, Tessa.

In Kaos' Fortress, the Skylanders confronted Kaossandra, who taunted the young Portal Master by proclaiming herself as 'a true dark Portal Master' and planned to rule Skylands by herself once she takes care of the Skylanders. She then engaged them in a battle "they will never forget", summoning evilized creatures and unleashing dark magic upon the Skylanders.

After defeating one of her 'pets', Bubba Greebs, the Skylanders tricked Kaossandra into firing her dark magic onto a nearby mirror that was dropped down by Tessa. The magic bounced off the mirror and zapped Kaossandra, pulling her in and trapping her inside. Kaossandra, realizing that she couldn't escape the mirror, called out for Kaos' assistance, but discovered that her son had already gone to the Cloudbreak Volcano to fulfill his own evil plan, leaving his mother to her fate; something that Kaossandra is proud of Kaos for. She was left trapped inside the mirror as the Skylanders, Flynn, and Tessa moved on to stop Kaos from his evil scheme.

Kaossandra is distant from her son, said to have "never exactly been the picture of a loving mother" and the cause of his behavior according to Glumshanks. She attempted to abandon him several times and mistreated him constantly, and finds his soft spot for the Wilikins proof that he has no talent for villainy. [3] Despite the fact that Kaos put his own selfish desires before his own mother and left her behind to be sealed away in her mirror, Kaossandra finally praises him for his betrayal in Swap Force, but as of SuperChargers still attempts to teach him by sending books through her prison.

Unlike Kaos, Kaossandra treats Glumshanks more nicely, and even notices that her son still mistreats the troll butler. It is frequently brought up that they used to meet to talk and have tea and cake. 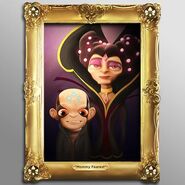 A portrait of Kaos and his mother.