Jet-Vac is a wingless Sky Baron who is one of the new Air Skylanders in Skylanders: Giants. His Series 2 name is Turbo Jet-Vac and his Series 3 name is Full Blast Jet-Vac. He has a Legendary counterpart known as Legendary Jet-Vac.

In Skylanders: SuperChargers, Jet-Vac is redesigned as a SuperCharger named Hurricane Jet-Vac and is given new abilities.

Noble and courageous, Jet-Vac always think of others before himself. Now a Skylander, he soars where even eagles never dare.[3] In the Full Blast microcomic, he's shown to be a bit of a defeatist, thinking his worth as a fighter is lost without a weapon.

In Skylanders: Imaginators, Jet-Vac displays dedication in searching for what has been stolen from him, in his case, his lunch that was stored away within the Sky Fortress.

Then one day, Windham was raided, Jet-Vac was horrified to see a young mother struggling to get her children away from danger. He was faced with a choice - either fly to safety himself, or give his wings to the mother so she and her children could make their escape. Of course, there was only one option the noble Jet-Vac was ever going to go with. He selflessly sacrificed his wings to save the others - and caught the attention of Master Eon in the process. While the feathered flight ace remains wingless to this day, Eon equipped him with a hearty vacuum-powered jet pack which more than makes up for it.[4]

Jet-Vac was one of the Skylander attendees at the Skylanders Academy last day of school party, watching a rehabilitated Kaos handing out cotton candy. Four months later, dangerous sky rifts began popping up around Skylands and the Sky Baron was assigned by Spyro to go with Stealth Elf, Terrafin and Gill Grunt to Know-It-All Island to find out more about the Rift Engines that may be a solution to the incoming threat.

Once at Know-It-All Island, the Skylanders and Flynn encountered Blobbers, who was sent by his village to learn about the strange rifts that were destroying everything across Skylands. A nearby Stone Head revealed to the group the history behind the Rift Engines and the fact that Kaos had awakened a power hidden long ago. Before the Stone Head could begin to tell the location of the Rift Engines, Kaos himself opened a rift and it consumed the island as soon as the Stone Head told a riddle to the Skylanders regarding the location of the Rift Engines. The Skylanders and their friends were soon rescued by non-Skylanders, Spitfire and Stormblade, who transported them all to safety with their vehicles.

After getting acquainted with Spitfire, Stormblade, and other non-Skylanders, Fiesta and Dive-Clops, Jet-Vac and the other Skylanders allowed the SuperChargers to help the Skylanders on their journey as there was no other available transportation. While treking through Skylands, the Skylanders and SuperChargers figured out the Stone Head's riddle and came to the Whirlpool of Destiny where the Rift Engines were hidden in an underwater city. While Dive-Clops and Gill Grunt used the Dive Bomber to begin their search underwater, Jet-Vac and the other land Skylanders held back a group of Kaos' minions to buy their friends some time.

Jet-Vac came to the Skylanders after their battle with Kaos in Scholarville, reporting to them of a brainstorm that was ravaging Shellmont Shores. After retrieving the Vortex Destroyer from the Academy Library, he and the Skylanders headed on to Shellmont Shores to put a stop to Kaos and the brainstorm, successfully stopping the ravaging storm. Jet-Vac and the Skylander later came to Sky Fortress to take back a Sky Baron battleship that was overtaken by Vultures to combat the Guacamole Monster.

Jet-Vac attacks by shooting air blasts out of his vacuum device, and his secondary attack is that he can also use his vacuum device to suck up the treasures and enemies in the surroundings. He also can fly with his vacuum device. In Skylanders: Battlecast, Jet-Vac can also make the enemy attack itself in a tornado or the scrapped Hurticane; his special ability is Erratic Vortex, swapping in a random enemy, and his signature gear is the Duplicator Mark II, which copies spells from the enemy.

In Skylanders: Ring of Heroes, Jet-Vac is a support class character. His abilities are as followws: 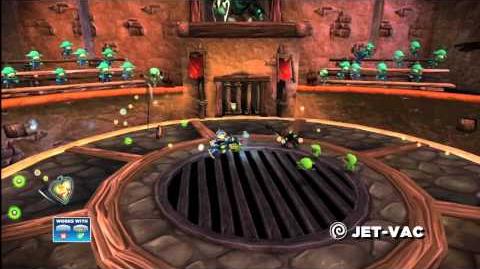 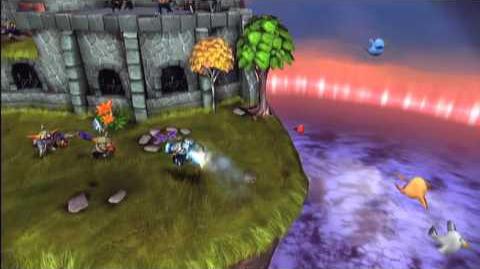 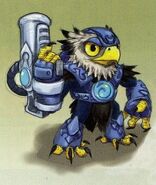 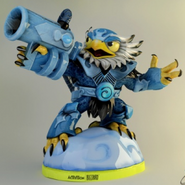 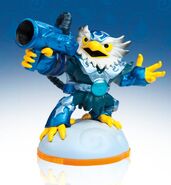 Jet-Vac on the Portal of Power

Jet-Vac about to take flight with Eruptor, trying to imitate swap force 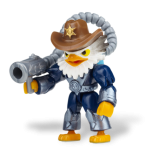 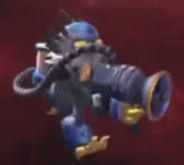 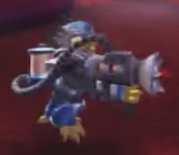 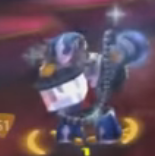 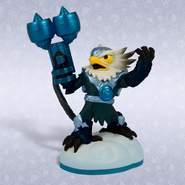 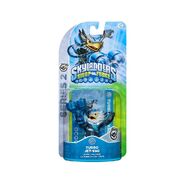 Jet-Vac's new armor and double gun from his "Shoot the Breeze!" Wow pow upgrade
Add a photo to this gallery 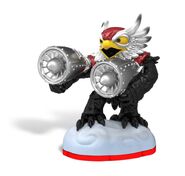 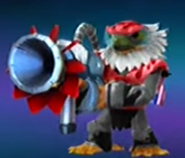 Retrieved from "https://skylanders.fandom.com/wiki/Jet-Vac?oldid=112210"
Community content is available under CC-BY-SA unless otherwise noted.