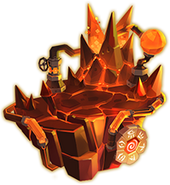 Infernal Volcano as seen in the Ring of Heroes official trailer