“Scorch anything in your path!”
—Vehicle Collection

The Hot Streak is Spitfire's signature vehicle in Skylanders: SuperChargers, included in the game's Starter Pack. It was made from elemental magma rock and forged in the depths of the Volcanic Vault. With maximum firepower, it is capable of achieving extreme speeds and ready to scorch anything in its path!

These are the vehicles stats in Skylanders: SuperChargers.

These are the vehicles stats in Skylanders: SuperChargers Racing

The Hot Streak is one of the best all-rounder vehicles in Skylanders: SuperChargers Racing. The vehicle boasts great yet balanced stats, although it's specialty lies in its Top Speed.

When SuperCharged with Spitfire, the Top Speed receives an enormous boost while Handling receives a great boost; Acceleration gets a modest boost while Firepower and Armour only receive a small boost. This coincides with Spitfire's stats, allowing for great race pace at the cost of weaker combat skill.

The Hot Streaks race weapon is its flamethrower, which attacks anything in front of it as long as the fire button is held down. At Level 16, the weapon is upgraded to leave opponents with a burn that lasts few seconds and deals extra damage. In Land races, the Hot Streak is used by Spitfire with SuperCharged mods, Stormblade with the Volcanic Vents mod and Nightfall with the Road Burners mod. 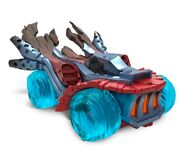 Hot Streak being piloted by Spitfire

Retrieved from "https://skylanders.fandom.com/wiki/Hot_Streak?oldid=118432"
Community content is available under CC-BY-SA unless otherwise noted.