Hot Head is a Fire Golem who is one of the eight Giants in Skylanders: Giants.

Hot Head was designed around one simple mechanic: cover enemies in oil and light them on fire. In later Skylanders games, the team would get feedback from the German localization team that this was not OK but during Skylanders: Giants, the development was so rushed through that this one slipped through. Nat Loh had originally asked for one fire hand and one oil hand but the two was determined to look better with two fire grill hands so the team just made it work. Hot Head's Sizzle Shower ability was visually inspired by Jiraiya's Fire Rasengan ultimate jutsu as seen in Naruto Ultimate Ninja Storm.

Nat Loh added details to the Eternal Flame upgrade that puts a dragon on Hot Head's fire hand while the Hot Oil Treatment upgrade puts a squid on his oil hand. "Hot with a Chance of Meteors" is a callout to Dragon Ball's Spirit Bomb and his Hot Rod soul gem transformation is a shout out to Robotech's Cyclone motorcycle.[1]

Impetuous is a good word to describe Hot Head. He just can't help himself. This Fire Giant is always burning with enthusiasm. He smothers his enemies in blazing blobs of burning oil first, and asks questions second.[2]

Hot Head had always been a short tempered fire giant. But it was when magical oil was discovered in Skylands that fuel was really added to the fire. As exciting as the discovery was, the celebration lasted only 5 minutes - coming to an abrupt halt when Hot Head needed to cool off and plunged into the thick black pool, causing the entire island to explode! Though it would be another 2,000 years before magical oil was discovered again, the impact that it had on Hot Head was immediate. He was instantly infused with magical oil, giving him the ability to generate an infinite supply of fuel - making him incredibly volatile, highly combustible, and ready to torch anything that got in his way.

There's something about being on fire that can be sometimes make people irritable. This Giant, Hot Head, is no exception. A vast, towering Fire Golem, the only thing short about Hot Head is his temper. Usually angry and often reckless, Hot Head once leapt into a pool of magical oil, the very first pool of magical oil ever to be discovered in Skylands. Hot Head hoped it would help him cool down. It didn't. The BOOM was heard all across Skylands, as the entire island Hot Head was on exploded in a spectacular fireball. Although most of the magical oil was instantly vaporized, some of it fused with Hot Head, granting him a limitless fuel supply and the ability to torch anything, or anyone, that might get in his way.

Directing his burning anger towards the Arkeyans, Hot Head was a valuable addition to the original Skylanders, while also helping cut down on their heating bills.[3]

Hot Head can fire both flames and blobs of oil from his hands. He can also summon rain-like drops of fire from the sky. Hot Head can even transform into a hot rod to run over enemies. In Time Twisters it was shown that Hot Head is very durable, as he was shot by Tech Geargolems, the projectiles deflected off his body, and merely tickled Hot Head.

In Skylanders: Battlecast, he has the ability to summon a Mood Ring Gear that increases his damage the more he is attacked, and, as well as having high health to shrug off attacks, many of his spells have conditions for him being attacked in the enemy turn. Hot Head's Special Ability is Boiling Over, which increases his power and is more effective if he was attacked in that turn. His scrapped signature relic is the Fury's Forge, which increases his allies' power by damaging them slightly. 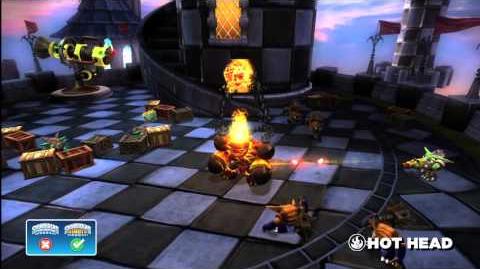 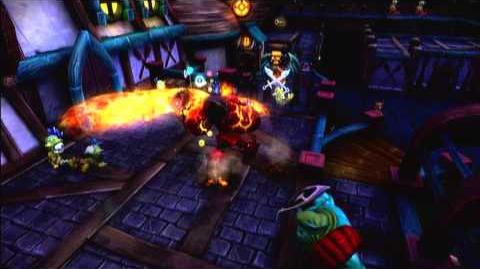