While the Giants were being designed by concept artist I-Wei Huang, the other designers were able to create more ability-centric designs to the Core Skylanders rather than being being confined to provided visuals. While Hot Dog started his journey this way, his destination - at least visually - was far off the mark. Nat Loh's original idea for what would become Hot Dog was to have a Tae Kwon Do-like martial artist who kicked fireballs out of his feet. In development, Nat was using Flameslinger's model for the placeholder art and the idea was coming along nicely. The fire wall animation was to have this Skylander make the wall with a leg sweep and force in forward with an explosive martial arts move. However, Nat Loh was given a dog, much to his disappointment. The animation team reworked the fire moveset that would be fit for a dog. Nat used this opportunity to fulfill his random ambition of making a dog who shoots bees when he barks. This idea was later implemented in Hot Dog's Series 2 Wow Pow, Bees! Bees! Bees!, in which Nat made sure to make the bee more prominent.[1]

Hot Dog possesses a fierce loyalty to his friends, and true to his nature, he likes to bury things, especially imps.[2] He is always bounding around like an excitable puppy - which is exactly what he is. Not the kind of Skylander to go hungry, he is always on the lookout for a sizzling snack.[3]

Hot Dog was born in the belly of the Popcorn Volcano. While on a nearby mission, a team of Skylanders had come across the stray fire pup when the volcano erupted and Hot Dog came rocketing straight into their camp, accidentally setting Gill Grunt's tent on fire. Using his nose of danger, he helped the Skylanders complete their mission - even pouncing on a Lava Golem like a blazing comet when it threatened his new friends. After displaying such loyalty and bravery, Hot Dog was brought back to Eon's Citadel where he became a Skylander - and then he proceeded to bury Eon's staff.

This cutie-wutie little puppy was born in the belly of the Popcorn Volcano, then spat out when the volcano erupted. Luckily for Hot Dog, he crash-landed safely on a tent in a nearby camp. But it was unlucky for the Skylander, Gill Grunt, who was fast asleep inside at the time. To make up for burning Gill Grunt's tent down, Hot Dog helped the Skylanders complete the mission Master Eon had sent them on. Using his amazing sense of smell, he led them to the end of their quest, and when a lava monster started threatening his new friends, Hot Dog demonstrated just how useful he can be in a scrap!

Brave, loyal, and able to scratch his ears with his hind legs, Hot Dog is a valuable member of the Skylanders, even if he does keep trying to bury Chop Chop when no one's looking.[4]

Hot Dog was enjoying a day-off at the Fantastic Fairy Fair with fellow Skylanders, Terrafin and Sonic Boom. The trio of Skylanders soon discovered a sad Rock Golem named Rocky who was under the unwilling employment of Professor Puck, the fair's owner who took Rocky from his home after discovering that the Golem's magical, singing voice made everyone within earshot dance. After saving Gurglefin from a sticky cluster of cotton candy, the Skylanders attended Puck's circus show with Rocky being the star attraction due to his singing. Soon, the show was interrupted when a group of Trolls and the evil Floss-O-Tron 3000 trapped everyone, including the Skylanders, under a layer of sticky candyfloss, and kidnapped Rocky, believing him to the Earth segment to the Mask of Power.

Thanks to Hot Dog's fire power, the Skylanders were able to free themselves and the crowd from the candyfloss. The fire puppy then assisted Terrafin and Sprocket in their battle against Kaos, the Trolls, and Floss-O-Tron 3000, saving the circus from a sticky explosion.

The Skylanders returned to the Eternal Archives after discovering a clue that helped them learn about the Boom Brothers, a pair of robots responsible for making explosives. Figuring that that the Explosive Emporium is where Kaos had taken Rocky, Hot Dog went with Terrafin, Sonic Boom, and Sprocket to Junk Mountain where the explosions factory laid. After getting past the aggressive Trash Ogre and the emporium's security, the Skylanders were able to sneak inside and find Rocky only to fall into a trap made by Kaos and the Boom Brothers. The evil Portal Master then forced the heroes to dance uncontrollably by throwing sticks of dynamite that contained Rocky's enchanted singing called disco dynamite. Terrafin quickly thought of a plan and instructed Sonic Boom to use her ear-piercing screech to drown the Boom Brother's disco dynamite and help stop the Skylanders from dancing. Thanks to this, the Skylanders were able to seal themselves inside the room, which turns out to be a large rocket.

Kaos threatened to blow the Skylanders sky-high should they refuse to let him and his troll army back inside the rocket. Even worse, the Boom Brothers recovered from the attack and held Hot Dog hostage, also threatening the Skylanders to surrender otherwise the robots would detonate the whole room using a pineapple grenade. Terrafin pretended to surrender to the Boom Brothers, tricking them into arguing with one another until one of the brothers forced the pineapple grenade down his sibling's throat, causing them both to explode.

With the danger of the Boom Brothers gone, there was still the threat of Kaos ordering the Skylanders to surrender Rocky. Sprocket unintentionally launched the rocket, sending the Skylanders away from Junk Mountain and leaving Kaos and his troll army under what was left of the Explosive Emporium. Back at the Eternal Archive, the Skylanders discovered that the Earth segment wasn't Rocky, but his singing voice, which was given to him centuries ago by one of the Spell Punks who first split the Mask of Power. They soon accompanied Rocky back to the fair and attended his show, which turned out to be disastrous for Professor Puck when Rocky's true, terrible singing voice was heard. This caused the audience to turn against Puck as they paid him to hear Rocky sing his magical voice that he lost and proceeded to run Puck out of town, leaving the Skylanders and Rocky satisfied over their victory.

Hot Dog was among the forty Skylanders who were summoned to stop Malefor, the Undead Dragon King, from attacking the Skylanders Academy. However he along with the other Skylanders were defeated by the evil dragon and had their powers stolen.

Hot Dog's main attack is Firebark, which has him shooting fireballs from his mouth and tail, and he has a primary combo where he shoots three fireballs at once. He can summon a wall of fire that travels straight forward to push and damage enemies; it can also be can be held on the Attack 2 button to be used as a shield for incoming enemies. His third attack, the Comet Slam, flips him in the air spinning and then slamming down upon enemies for massive damage.

By choosing the Burning Bow-Wow path, Hot Dog's fireball attacks are further developed. This upgrade path grants him a more powerful Firebark attack and access to 2 new attacks: Burnin' Bees and Comet Dash, both useful in thinning the crowd. His Comet Slam attack can also be made to unleash fireballs all around him, allowing him to get right into the thick of battle.

By choosing the Pyro Pooch path, Hot Dog's Wall of Fire attack is further developed. This upgrade path grants him increasingly more powerful and more efficient firewalls to attack enemies with. The Wall of Fire can be upgraded into a 'Magmutt Battalion;' a wall of fiery dogs that shoot fireballs whenever Hot Dog does, allowing him to fight from a distance.

Hot Dog is generally a medium-long range fighter with powerful attacks, regardless of which upgrade path is chosen. However, his health and armor stats are very low, which ties him with Gill Grunt for the lowest armor in the game, making Hot Dog not as useful for battling enemies with stronger attacks. 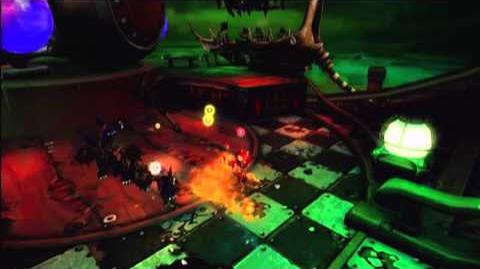