“Blink and you'll miss him. But he won't miss you.”
—Villain Vault

Hood Sickle is a reaper who was originally one of the trappable Undead villains in Skylanders: Trap Team. In Skylanders: SuperChargers, he is an NPC racer, driving a Sky vehicle fashioned with skulls and ominous appendages.

In Skylanders: Imaginators, Hood Sickle is a Dark-elemental Sensei who teaches Imaginators of the Sentinel Battle Class, changing slightly in appearance. Similarly to Smash Hit from the previous game, he also has a Steel Plated counterpart.

Hood Sickle was summoned by the Dreamcatcher as a surprise to stop the Skylanders' progress at Telescope Towers. The reaper was defeated despite his teleportation abilities and was captured.

Upon returning to Skylanders Academy with the reaper, Pain-Yatta, and Dreamcatcher, the Skylanders took him inside the school to the Hat Shop for his Villain Quest with Hatterson, who had arrived for its grand opening after they, Mags, and Cali returned from Rainfish Riviera with the inventor's Information Squid, which happened to be Kaos in disguise and subsequently offered his assistance to the Academy. The quest was called "Hatastrophe!", where the Molekin explained to the heroes that the Trolls had been making counterfeit hat machines that pop out non-magical hats and had been selling them on the black market, and needed Hood Sickle to shut the operation down. Afterwards, he was awarded with Hatterson's thanks and a new oufit, and told him and the Skylanders to come by his store anytime with new hats for sale.

At first glance, it’s easy to be frightened by Hood Sickle. Some say it’s his imposing stature that freaks them out. Others are unnerved by his menacing hood. But most just try to stay away from his long, sharp scythe – and it didn’t help that he had a bad habit of disappearing and then suddenly popping up behind unsuspecting people. In fact, the Trap Masters that locked him away in Cloudcracker Prison hoped they would never have to see him again. But Master Eon thought there might be a chance for Hood Sickle to change his ways. Everyone said Eon was crazy, but after spending time with the mysterious creep, Eon learned that Hood Sickle was actually not a bad guy – just really super spooky. Hood Sickle took his job of terrifying others very seriously, and Eon believed that perhaps he could bring a similar dedication to teaching others as a Sensei. Plus, he figured that Skylanders in training would certainly pay attention in his classes. This has all proven true, and Hood Sickle now teaches Sentinel Imaginators, who definitely hang on his every word. Or else.

Hood Sickle can strike with his spectral energy scythe and teleport ahead, summoning black ghosts in his wake. If he has active ghosts, they will explode whenever he swings his scythe.

As a Sensei, he switches his previous weapon for a double-ended scythe that is now made of steel, and his ghosts are replaced by Dark Remnants which enhance his scythe attacks. He can also now create gravity wells that slow down enemies, and explode after a short time. 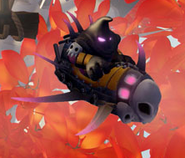 Hood Sickle's vehicle in SuperChargers.
Add a photo to this gallery

Retrieved from "https://skylanders.fandom.com/wiki/Hood_Sickle_(character)?oldid=117388"
Community content is available under CC-BY-SA unless otherwise noted.