High Volt is a former security officer and one of the the Tech SuperChargers in Skylanders: SuperChargers. His signature Vehicle is the Shield Striker.

High Volt initially started as a Light elemental character, at some point even having the same color scheme and design but the other symbol on his shoulder pads.[2]

High Volt's initial concepts as seen in GDC 2016.
Add a photo to this gallery

High Volt is a very dedicated commander, even willing to take orders from Buzz. He is also extremely observant and intelligent, not letting any evil being out of his sight and will get any possible information out of them. Like all Tech Skylanders, High Volt is fascinated by machinery.

High Volt was once the commander of a special security force that was in charge of patrolling the border between the known regions of Skylands and the mysterious uncharted region known as the Outlands. From atop the Shockspire Tower, their security headquarters, High Volt vigilantly monitored any strange activity beyond the border, knowing that Kaos and his minions were always up to no good. Over the years, he had defended Skylands against countless Greeble attacks, Troll uprisings, and even a few evil food chains that were attempting to expand. But on a recent patrol mission into the Outlands, High Volt discovered a heavily guarded construction site, where Kaos' minions appeared to be building a colossal Doom Station of Ultimate Destruction! Realizing at once that all of Skylands was in danger, he raced to the Skylanders Academy to inform Master Eon and joined the Skylanders in their fight to stop it!

Use powerful electric close range attacks to stun and defeat your enemies!
Defeat enemies with a powered up electric beam! 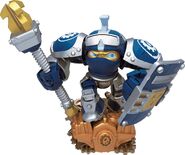 High Volt's armor from his "Insulated Iron" upgrade, Shield from his "Re-Fused" upgrade and Spear "Light Fighter" path
Add a photo to this gallery

Retrieved from "https://skylanders.fandom.com/wiki/High_Volt?oldid=127885"
Community content is available under CC-BY-SA unless otherwise noted.