High Five is a dragon/dragonfly hybrid who is one of the Frito-Lay Skylanders for Skylanders: Trap Team. On September 22, 2014, he was announced the winner of the Frito-Lay contest. He was part of his own giveaway before his public release in Spring 2015.

High Five came to gameplay designer Nah Loh as finished concept art. As a dragon(fly), Nat Loh felt compelled to keep to breath weapons, and the racer 5 number on High Five's head seemed to imply speed so Nat put two abilities he thought he would never put together for fear it would be too overpowered - fast projectiles and fast dashing - and made them High Five's moveset. For the primary projectiles, Nat revisited the unfulfilled Mycon Plasma Spore projectiles that Wrecking Ball was originally supposed to have. These would create a cloud of poison gas that grew bigger in size but dissipated in damage. High Five's moveset really became about high risk high reward, which was demonstrated in his Buzzerker Overdrive upgrade. It was controversial to have in a kids game but Nat sought to make deep gameplay experiences even in kids titles.

Nat knew people wouldn't enjoy the idea of spending HP to do more damage. To offset this, he made the cost temporary spawning apples that would restore High Five's health after his attack, but restoring your health was optional. Using berserker mechanics, High Five would actually get stronger and faster the lower his HP was and the max charged version of his Overdrive Fly Slam attack did the highest amount of damage seen in a Skylander game to date (the playable Doom Raider bosses and especially Kaos would make short work of those damage numbers however but that was justified by their short-lived nature). After finalization, High Five became a great Skylander for the more advanced min-maxer players out there.[2]

As part of a naming contest held by Frito-Lay, Buzzerker's name was changed to High Five by Phylicia Nakamoto from Elk Grove, California.[3]

High Five is full of energy and is super fast. When danger calls, he is the first to fly into battle.[4]

High Five is one of the most skilled sky racers of all the dragonflies. But as the fifth son of the Royal High Flying Dragonflies, he was not allowed to enter any of the racing tournaments that took place each year because of his age. Instead, he was forced to watch from the sidelines as his four older brothers competed for the coveted Trophy of Sparx, which legend has said holds magical properties. One year, during the biggest racing event of the season, High Five learned that the Troll Racing Team had stolen the valuable trophy and were going to use the race to cover their escape. He quickly took action, jumping into the race and using his amazing flying skills to weave and dodge his way to the front of the pack, where he caught up to the trolls and brought them down. For his actions, High Five was given the Trophy of Sparx. Even more importantly, he was made a Skylander, where he now helps protect Skylands from any evildoers.

High Five can fire a stream of Poison Pellets from his mouth, even in rapid fire. These Poison Pellets can leave behind Poison Clouds that damages enemies when upgraded further. As his secondary attack, High Five can dash across the ground with his super speed and leave enemies spinning while damaging them. When further upgraded, High Five can perform a powerful Fly Slam attack that can be done in the air, and even suck enemies in while charging it. While charging up the attack damages him, he also releases apples during the charge, picking them up restores some of the HP lost.

Despite having no flight upgrade in the game, High Five is able to fly, but only for a short while. 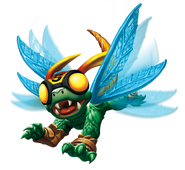 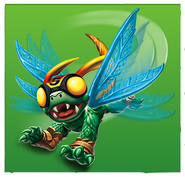 Another promotional art of High Five with complete blue wings 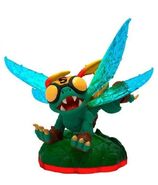