“Bow down to the king!”
—Bowser, Unexpected Allies

Hammer Slam Bowser, otherwise known as Bowser, is the Koopa King and a special Skylander-amiibo hybrid, along with Turbo Charge Donkey Kong. He is one of the Fire SuperChargers in Skylanders: SuperChargers, equipped with his signature vehicle, the Clown Cruiser. Bowser is exclusively playable on Nintendo consoles and is available only in the Wii and 3DS Starter Packs of the game. However, as of late December 2015 and early January 2016, he and Donkey Kong come in SuperCharged Combo Packs with their respective vehicles.

Being one of Nintendo's most iconic antagonists, Bowser is very tyrannical, cruel, ruthless, and oppressive, willing to do whatever it takes to defeat his former nemesis Mario, and capture his love interest Princess Peach. Now as a SuperCharger, Bowser is a trustworthy warrior; courageous, selfless, and loyal to those who can't help themselves. He is still sinister, but in a good way (very similar to the SWAP Force Skylander, Rattle Shake). He also tends to assume leadership of the SuperChargers in Spitfire's absence. He is also a very frightening fellow, as he managed to scare Buzz during his quest at Skylanders Academy.

Like many of the Fire Skylanders, the Koopa King is shown to have a fiery temper, though he seems to be able to control it, much like Eruptor. Bowser is also highly intelligent, as in the past, he was able to construct various weapons and machinery single-handedly, though when it comes to combat, he has his Magikoopa assistants Kamek and Kammy do the thinking for him. He also clearly detests immaturity, as shown when he was trying to get Donkey Kong to pay attention to their brawl with Blubberbeard.

Bowser is the king of the Koopas and believes himself to be the supreme, unquestioned ruler of a kingdom far from Skylands. A hot-tempered and spiky-shelled warrior, he was transported to Skylands by traveling through a rift that had been created by Kaos' terrible Sky Eater. The Skylanders sent out a distress call across all the dimensions to call for reinforcements, and for reasons known only to Bowser himself, he has decided to join this epic battle against Kaos and the Darkness in his Clown Cruiser as the newest and most lethal of all the SuperChargers!

When Kaos severed the connection between the Portals in Skylands, Mags' distress signal was not only able to reach all of Skylands but to other worlds as well. Both Bowser and Donkey Kong were transported to Skylands through a rift where they were soon attacked by a gang of pirates lead by Captain Blubberbeard. During the battle, they discovered two Rift Engines nearby and touched them, transforming into SuperChargers. With their newfound powers, Bowser and Donkey Kong defeated the pirates and drove them away. SuperChargers, Bone Bash Roller Brawl and Lava Lance Eruptor, discovered the two newcomers and brought them back to the Skylanders Academy where Buzz explained what was happening to Skylands. At first Bowser wasn't willing to help out, as he believed that since Skylands wasn't his world, it wasn't his and Donkey Kong's fight. Buzz soon noted that if Kaos succeeded in ruling Skylands, Bowser's world would be in danger as well. With an enhanced Clown Cruiser to seal the deal, Bowser decided to join the battle against Kaos as a SuperCharger.

The former Koopa tyrant and the primate hero were sworn enemies. Now together as Skylanders, they are in good terms with one another, as evident when Bowser was defensive of his associate during their confrontation with Blubberbeard and his pirates.

In Skylanders: SuperChargers Racing, Hammer Slam Bowser is the best combat racer in the game! Both his Firepower and Armour are exceptional, with his Armour peaking out at the maximum for a Skylander racer. He also boasts good Top Speed. He is let down by sub-par Acceleration and Handling, but makes up for having great battle stats.

His stats are noticeably similar to Dive-Clops'.

As a SuperCharger, he has access to the vehicle mods. When paired with his Clown Cruiser, his Firepower gains a large boost; he also gets a great boost to his Top Speed and an additional boost to his Handling. His Acceleration and Armour receive only a minor boost.

As an AI racer, he uses the Barrel Blaster with the Steel Drum Driver mods, the Reef Ripper with the Thumpback Prow mods, and his Clown Cruiser with the SuperCharged mods.

Use masterful battle tactics to cause your Koopas to do devastating damage to enemies!
Power up with new mighty lava attacks to make enemies feel the burn! 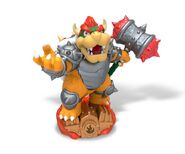 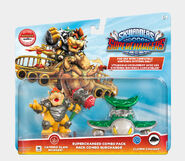 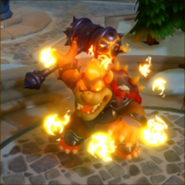 Retrieved from "https://skylanders.fandom.com/wiki/Hammer_Slam_Bowser?oldid=115622"
Community content is available under CC-BY-SA unless otherwise noted.