Haldor is the Great Northern Wizard of Vindlevale in the console versions of the Empire of Ice level in Skylanders: Spyro's Adventure.

Haldor was a bearded "mesmorph wizard," who was among the game’s first ten proposed characters. "He had a magical staff that created little gnome clones of himself that would explode," says Michael Graham. He made it as far as a plastic prototype, and although "his powers were fun, we felt we could do more with the personality. We wanted all the characters to be heroic and aspirational. He was kooky and a very interesting character, but he wasn’t the thing every kid aspires to be — he was a weird, grumpy, old gnome wizard. But we still liked the way he played, so he became the wacky, bumbling Double Trouble."

If you’re a big Skylanders fan, Graham explains why he looks so familiar. “We kept him alive,” he says with a smile. “He became Haldor of the Empire of Ice expansion pack. You still see his character there, and I think he works really well in that pack. But he was a playable toy at one point."[1]

His abilities would have been to summon garden gnomes.[2]

Haldor can fly and teleport as well. In a cutscene played when the Empire of Ice figure is first put on the portal, it was shown he could conjure a structure of ice, and it functions as a rocket to the Empire of Ice.

Haldor sought out the Skylanders for help, hoping they would free his home of Vindlevale from the icy grip of the Ice Ogres. He guided the Skylanders in assembling the catapult that was needed to destroy the wall that was causing his village to be locked in eternal winter. Haldor had a habit of saying 'Wahhoo!' up until the Skylanders freed his village from Eternal Winter, and then started saying 'Huzzah!'. 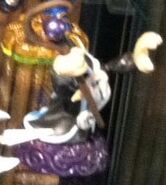