The Gryphon Park Observatory, also known as the Rainbow Gryphon Nature Reserve, is an Adventure Pack in Skylanders: Imaginators, available with Air Strike and an Earth Creation Crystal. The legendary Rainbow Gryphons has started laying eggs for the first time again in 50 years, but the Troll poachers are stealing the eggs for their "Evil Zoo of Terrible Conditions".

The Skylanders will have to rescue the eggs from the Trolls and return them to the Gryphons. The telescope at the Observatory will open a path the same direction the telescope is pointing to.

A blue Rainbow Gryphon and her hatchling

The packaging of the Gryphon Park Observatory Adventure Pack 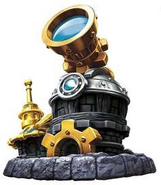 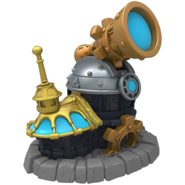 Retrieved from "https://skylanders.fandom.com/wiki/Gryphon_Park_Observatory?oldid=127568"
Community content is available under CC-BY-SA unless otherwise noted.